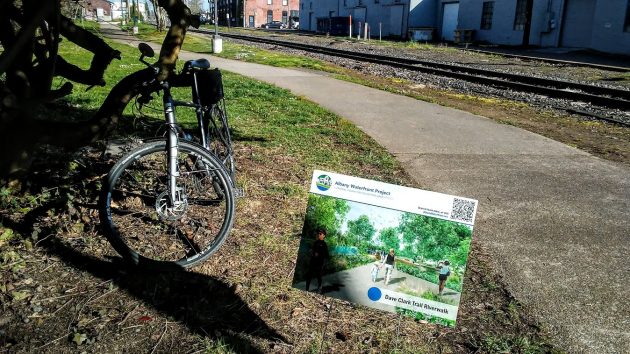 A sign along the Dave Clark Path invites people to check out the final riverfront designs.

The city of Albany and its consultants, Walker Macy, have published the final designs of the proposed riverfront redevelopment project. They ask people to take a look at the details online.

You can find the presentation here. As you’ll see, the interactive map lists all the elements of the overall project and briefly explains each one.

Eventually, the CARA (urban renewal) advisory board and then the city council, acting as the urban renewal governing agency, will determine how much to spend and which of the several elements to carry out.

This decision may be made later this year. Or maybe not. The CARA program is not known for blinding speed.

At Monteith Riverpark, the design calls for a new playground including a summertime splash feature for little kids. The stage and restrooms would be rebuilt, and the parking lot repaved.

Also at Monteith, the plan calls for a pebble-beach landing for hand-carried boats. It’s not clear whether the designers have taken the ever-changing bottom of the Willamette River into account.

The plans do not envision trying to restore the floating dock built in the 1990s and dismantled when it became useless because the river had changed.

Another major element is turning the western four blocks of Water Avenue into a so-called “plaza street” that could be closed for special events. The rest of Water Avenue to Main Street would get trees and sidewalks.

Along the Dave Clark Path, the design calls for additional connections to Water Avenue across the railroad tracks. The map shows a new pocket park near the trestle across the river, but that’s not mentioned in the description.

The idea of the whole enterprise is first to make the riverfront more enjoyable to more people, residents and visitors alike, and then to encourage redevelopment of private property along its length.

The second part is likely to be a long-term proposition, even if CARA carries out the public design in the next few years. (hh) 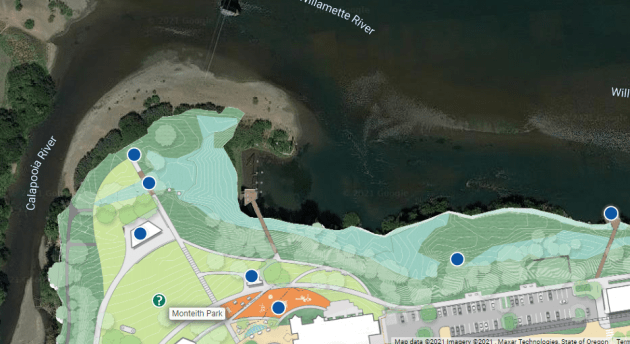 The blue dots mark projects. For what they mean, check the interactive map on the city’s riverfront website.