How about a bridge here? – Hasso Hering

How about a bridge here? 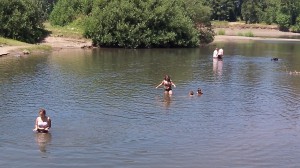 This is where a floating footbridge once crossed the Calapooia River.

It’s my hope — forlorn though it may be — that some day a little floating bridge across the Calapooia River might once again link Albany’s Bryant and Monteith River parks. If you were around the mid-valley in the 1990s, you might remember that bridge, put in by Dave Clark, then the parks director in Albany.

Dave has been dead now for more than 10 years, but users of Albany parks are reminded of him by lots of features he worked to establish, among them the amphitheater at Timber Linn Park and the walking and bike path along the Willamette River.

Dave dreamed of a long-distance riverside path stretching up and down the river from Albany. And the Calapooia footbridge was part of that idea. It was completed in the mid-90s, and it served the public one or two years. But in 1996, the wintertime high water washed out the pilings that held the floating pontoons in place.

For a year or two, the parks department made an effort to repair the damage. But by then, some fish runs in the Willamette Basin had been declared threatened, and suddenly various state and federal agencies had veto power over any kind of work on the rivers, whether it harmed fish or not. So nothing was done.

And even now, a paved walkway in Monteith Riverpark ends abruptly at the concrete abutment where one end of the floating bridge was attached nearly 20 years ago. Maybe some day somebody will get the idea that this is a pretty good place for a bridge. (hh)

From Stephanie Low:   I just read your commentary today about replacing the footbridge over the Calapooia River between Bryant Park and Monteith Park.  I suggested the idea to Ed Hodney (Albany parks and recreation director) before and was told the same reasons that you cited.  Is there anything we citizens can do to get the ball rolling to have a new footbridge (I would like a replica covered bridge in keeping with the various covered bridges in the area.)  I am passionate about trying to get more people to downtown Albany and I think this project would go a long way to promoting fun things to do in Albany.
Thank you.

Thanks for  the comment. Is there anything citizens can do? Sure: Keep the idea alive and ask the parks commission and the city council to initiate some planning toward that end. Since the Calapooia Watershed Council just had bulldozers working in Cox Creek, it must not be impossible to work in Willamette tributaries. (hh)