Bridge to Bryant: Still safe but …

Every other day or so, my bike and I cross the Calapooia River on the Third Avenue Bridge. So it was of more than passing interest when I read that the bridge’s substructure was in “critical” shape.

The state’s bridge engineer, Bruce Johnson, wrote the city of Albany this July. “The August 2015 inspection report shows that the superstructure is in ‘satisfactory’ condition and the substructure is in ‘critical’ condition,” he wrote. “The substructure rating is based on the severe erosion of the channel immediately downstream of the spillway apron.”

His letter also recommended that based on a load rating of the superstructure and crossbeams only, the bridge should be posted with a load limit of 30 tons for vehicles with six or seven axles such as large construction rigs. The city staff is asking the council to authorize this, and also to amend the municipal code to remove a 10-ton limit imposed before the bridge was repaired in 1974 and not repealed afterward. The 30-ton limit would have little or no practical effect; most vehicles of that size don’t use the bridge anyway because of the railroad trestle and sharp curve at its lower end.

A staff memo going to the council for Wednesday night’s meeting reflects some concerns about the bridge’s long-term viability: “If the Third Avenue Bridge were closed or restricted, access to Bryant Park from downtown Albany would be via a five-plus-mile detour along Queen Avenue, Riverside Drive and Bryant Drive SW.”

The problem is scouring at the bottom of the bridge supports where the Santiam Canal drops into the Calapooia in a powerful — and noisy —  waterfall. Annual inspections have shown no worsening of the scouring. Still, there is “some concern,” according to the staff memo from Chris Bailey, director of public works operations.

Upshot: The city will keep an eye out for funding to fix or replace the bridge, possibly applying for a grant under the Local Highway Bridge Program in 2017. Meanwhile, I trust my bike and I can safely ignore a weight limit of 30 tons. (hh) 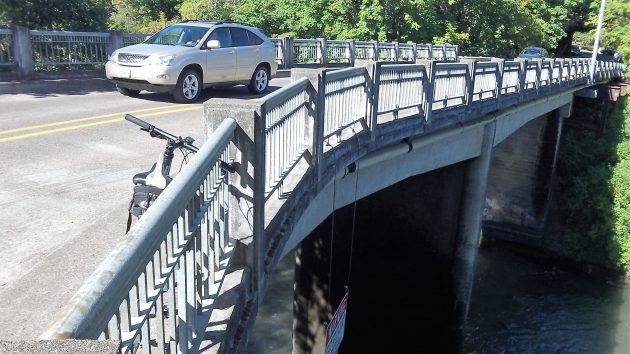 The Third Avenue bridge leads to Bryant Park and, via Bryant Drive, to Riverside Drive.


7 responses to “Bridge to Bryant: Still safe but …”