In the Covid ‘freeze,’ expect no arrests 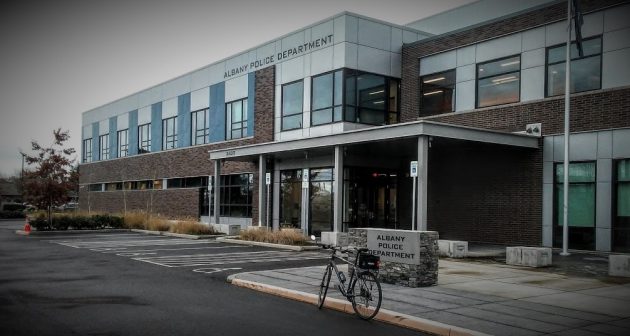 The Albany police headquarters last January, in the good old days before Covid-19.

Despite tough talk from Governor Brown, don’t expect anyone to be hauled off in handcuffs in Albany or elsewhere in Oregon for violating her new executive order for a coronavirus “freeze.”

A day before the order took effect today, the Oregon State Police along with the Oregon associations of police chiefs and sheriffs issued a statement. “Oregon law enforcement will continue to follow an education first approach,” they said. Enforcement action, meaning misdemeanor citations for violating the executive order, would be a “last resort.”

In Albany, Police Chief Marcia Harnden said her department agreed with the approach and tone expressed in the statewide statement from law enforcement. “Education first,” rather than citations or other actions, has been the Albany policy all along.

On its website, the police department took down a form for reporting violations that had been up since the first statewide corona lockdown in March. Some people had publicized the form on social media, and it came across as though the police were inviting citizens to rat out their neighbors, which was not the intent.

For at least two weeks starting Nov. 18, the governor’s order among other things shut down a number of indoor venues, limited restaurants and bars to deliveries and take-out, and banned social gatherings of more than six people from more than two households. The latter would apply to Thanksgiving family dinners.

In their statement, Oregon police agencies said: “We cannot arrest or enforce our way out of the pandemic. We can, however, work together in following these restrictions to make our communities a safer and healthy place.”

Albany’s Harnden has family in Washington state, from where she came last year to become chief of police. She won’t go see them for Thanksgiving, and they won’t come to Albany.

“Please take a breath,” she advised people in their reaction to the new restrictions. “Be smart about it.” (hh)


9 responses to “In the Covid ‘freeze,’ expect no arrests”