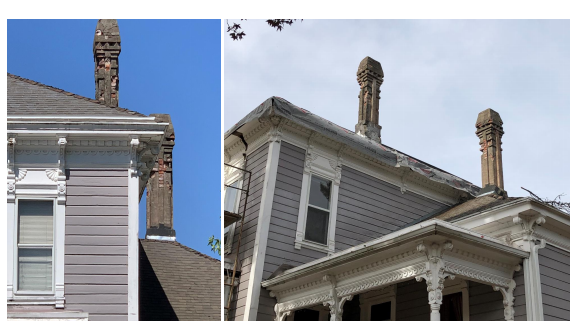 The chimneys at 331 Montgomery S.E. as shown in the staff report to the Albany Landmarks Commission.

Contractor Joel Dahl got support Wednesday from the Albany Landmarks Commission for his restoration of the historic Goltra House at 331 Montgomery St. S.E.

After a hearing on Dahl’s project for “historic review,” the board voted 3-1 with one abstention to approve his requests to replace various elements on the outside of the house, such as metal roof railings, crown moldings, facia, porch flooring, and siding. It also agreed with his use of steel doors instead of wood on the property’s carriage house.

There was a lot of discussion about the two brick chimneys rising above the roof and visible from the Fourth Avenue side of the house, which dates from 1892. The board majority agreed with Dahl that the chimneys are deteriorated to the point where they are unsafe and must be removed. But the members also urged him — and made this a condition of approval — to document the dimensions and appearance of the chimneys, and to fix it so replicas can be put back later.

Landmarks members Larry Preston, a contractor, and architect Bill Ryals suggested how exact replicas can be made with much lighter materials, such as fiberglass, without adding weight to the roof. This way, Dahl can remove the lower parts of the crumbling chimneys inside the house as he intends.

Three or four neighbors spoke up to praise Dahl for what he has done with the house. So did the members of the Landmarks board. (For some background on this project, check the story here.)