From Oxford House to a family’s home 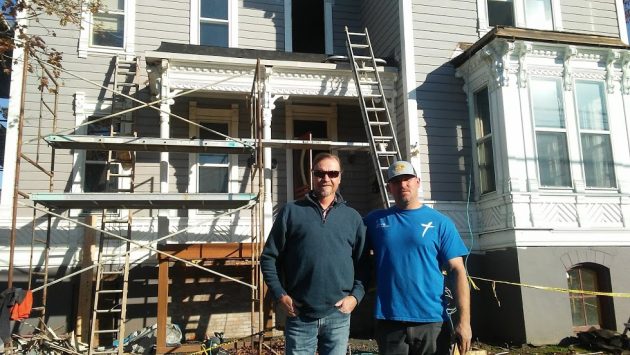 Mike Davis, left, and Joel Dahl in front of the historic Goltra House on Monday. Dahl is renovating it as his family’s home.

A bike ride in Monday’s sunshine took me past 331 Montgomery St. S.E., an address in Albany’s Hackleman Historic District where a remarkable story is taking place.

The two-story structure with a basement dates from around 1892 and is known as the Goltra House, for a prominent Linn County farm family. Joel Dahl used to live there seven years ago when it was an Oxford House, a group home for recovery from drugs or alcohol.

Since then, Dahl, 41, completed an LBCC course on how to start and run a business and has launched three or four, including Dahled-Up Construction. Now he’s buying the Goltra House and is renovating his former residence as the future home of his family. (He plans to get married soon, he told me. The others in his family are two daughters, two sons, and a baby on the way.)

The property was an Oxford House until about a month ago. Mike Davis, who owns five Oxford Houses in Albany, but didn’t own this one, told me the nine men living there moved to one he owns on First Avenue.

Davis has been Dahl’s sponsor in the Oxford House program, which among other things involves 12 steps and a reliance on God. He happened to visit the construction site Monday just after I rolled up on the bike.

Dahl hopes to complete the renovation in two or three months. On Nov. 6, he faces a hearing before the Albany Landmarks Commission, which must rule on his exterior alterations such as installing new metal roof railings, taking down two chimneys, and replacing damaged crown molding, facia, porch flooring, and siding.

He also must get the commission’s OK on a set of steel garage doors to replace the originals made of wood. The new steel doors are in place. To me they look like wood. Actual wooden replacements would have cost $9,000, Dahl told me, compared to $3,000 for steel.

As for the chimneys, Dahl has photos of their crumbling bricks. He says they have to go lest one of these days they come tumbling down on their own. (hh) 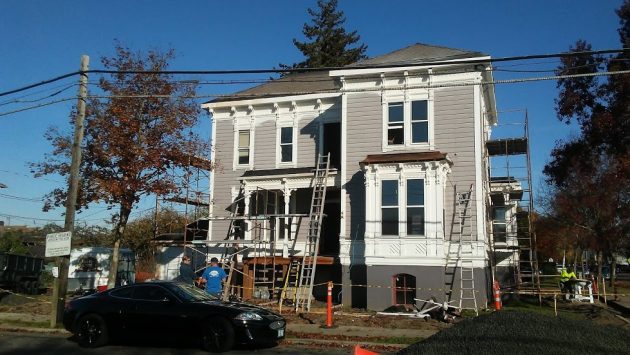 The Goltra House, at Montgomery Street and Fourth Avenue, is undergoing renovations.


19 responses to “From Oxford House to a family’s home”