Why this has been taking so long 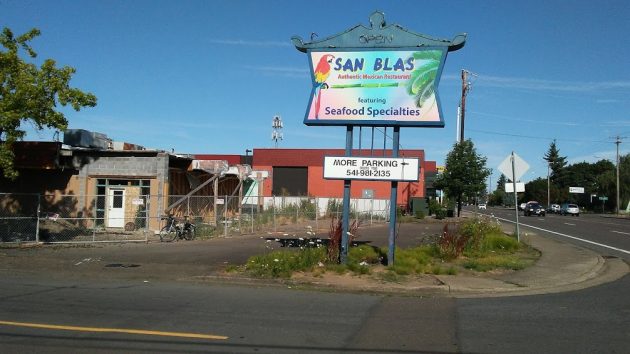 At Bain Street and Santiam Highway, the corner looked the same on Sunday as it has since last year.

So what’s the deal with the unfinished construction at the former San Blas Mexican Restaurant at Bain Street and Santiam Highway? That was the gist of an email that arrived last week.

When I wrote about this property last Noevmber, city officials said they had ordered the construction stopped because it had been started without a building permit. The permit had not been issued because the size of the building’s planned expansion required review and approval of a site plan, and no plan had been submitted.

On Monday Matthew Ruettgers, development services manager at City Hall, brought me up to date. A site plan was submitted on Dec. 6. In March, the planning staff asked for revisions. But none came in. And last month, on June 5, the application was considered expired.

A Salem architect has requested a new building permit for the building’s expansion. The building division’s website says the permit was applied for in May and remains “pending.”

The city sent review comments on the permit back to the architect within the last month, Ruettgers wrote me. “It is my understanding they are intending to continue on with this project and will be submitting a new site plan application.”

The person who asked me about this has a business nearby and thinks the long-unfinished construction at the corner is an eyesore. But unless it poses a hazard, there’s no limit on how long a construction project can remain at this stage as long as there’s some progress toward getting the paperwork issued or the job completed.

“In this case,” Ruettgers told me, “the site is securely fenced and has not had a glut of issues with trespassing.”

The restaurant has been closed about two years. No telling when the construction to enlarge it will resume. (hh)


2 responses to “Why this has been taking so long”