When the Alsea Highway will be closed 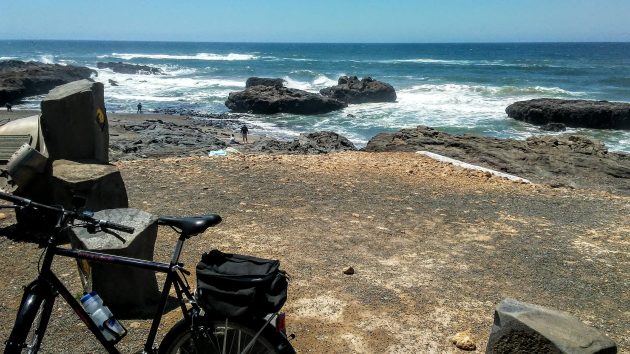 At the Smelt Sands State Recreation site in Yachats a couple of weeks ago.

If you plan on taking Highway 34 to the central Oregon coast later this month — whether to visit the scene in the photo above or somewhere else — you might be interested in ODOT’s plan to close a bridge for repairs over one whole weekend.

This is the bridge over Maltby Creek, which is at mile post 35.6, about four miles west of Alsea.

ODOT has announced plans to replace the timber deck of this bridge, which may come as a surprise to motorists like me who never realized there’s a bridge there, much less one with a wooden deck. From behind the wheel cruising along, it just looks like part of the asphalt highway.

Ever helpful, ODOT suggests: “Take U.S. 101 and U.S. 20 to detour around the work area.” Which seems kind of obvious, since there’s no other reasonable alternative route.

So, if you remember the closure dates, you won’t take the scenic and winding Alsea Highway for your coastal jaunt that weekend.

If you forget, or miss whatever signs ODOT will probably post in Philomath and Waldport, that “detour” might cost you an extra 30 or 70 miles depending on whether you’re headed to the coast or coming back. (hh)


7 responses to “When the Alsea Highway will be closed”