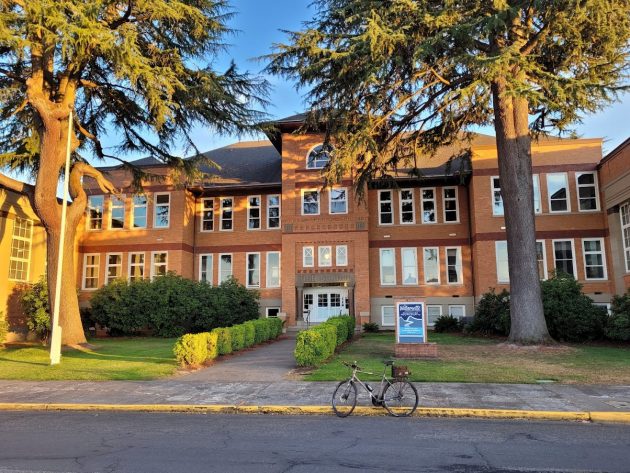 The front of the old Albany High School: The three-pane windows are new; old ones have two panes.

The church that owns the old Albany High School has run into a roadblock in its project to replace 34 windows in the historic building’s façade.

On Wednesday night, the Albany Landmarks Commission unanimously denied a request by Willamette Community Church to use a substitute material — vinyl instead of the original wood — in the sashes of the new windows.

Starting about 20 years ago, the church began replacing 156 of the 242 windows in the building, built in 1909 and expanded with two wings in 1930. Now they’re in the last phase of this work, with 11 of the last 34 still to be done. The others are finished, all with vinyl sashes.

The city building division stopped the work on July 16 because no building permit had been issued for any of it. To get a permit after the fact, the church needs Landmarks’ OK for the 34 windows.

The lack of a building permit dominated much of the remarks by commission members during the virtual meeting, even though it was only the matter of substitute materials that was at issue in the quasi-judicial proceeding. (You can listen to an audi0 version of the meeting here. The vinyl-window hearing starts about one-third of the way in.)

The Landmarks denial can be appealed to the city council.

Camron Settlemier, an Albany resident and advocate for historic buildings, was the only witness to oppose the application during the public hearing. He objected to vinyl, of course, but also to the three-pane pattern of the new windows already installed. The old windows facing Third Avenue have two panes.

It’s not clear what happens next, whether for instance the city will make the church tear out the 23 vinyl windows already completed in this latest phase. (Planning manager Scott Whyte told the commission that older window replacements going back 20 years are protected by the statute of limitations.)

Bill Ryals, the Albany architect and member of Landmarks, lamented the position the application created for the commission, given the no-permit work already done. His point was that the panel had no choice but to reject the application, but he worried this would lead to an article on hh-today about “how mean we are.” (hh)