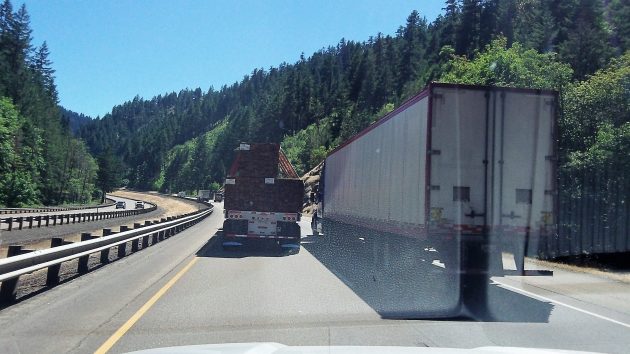 Trucks head down I-5 in southern Oregon on July 11. (NOT a cell phone photo.)

Getting stuck behind one slow 18-wheeler passing another on the freeway made me wonder whatever happened to this year’s proposal to raise the speed limit for trucks. We’ll get the answer to that question in a couple of months.

As you may recall, the Oregon Department of Transportation was looking into the possibility of raising the truck speed from 55 to 60 mph on I-5, on I-205 from the I-5 junction to West Linn, and on I-84 from Troutdale to The Dalles.

This was in anticipation of possible action in the legislature. As it turned out, the legislature adjourned without doing anything about speed limits. But after a study and public meetings this past spring, the state traffic engineer recommended on June 1 that the truck speed limit be raised to 60 mph on all those freeway segments where the limit now is 65 mph for autos and 55 for trucks, except in the stretch through Roseburg. There, ODOT recommends that the limit be dropped to 60 for cars and kept at 55 for trucks.

So now what? When I asked, Shelley Snow of ODOT Public Affairs told me that the Oregon Transportation Commission will take up the recommendation when it meets in Salem on Sept. 22. The commission may make a decision then or delay it to consider any additional information brought up at the time.

ODOT found that the actual average speed difference between cars and trucks on the freeway is about 2-3 miles an hour, not the 10 mph suggested by the posted signs. “The recommended increase to truck posted speeds (60 mph) would more closely represent the speeds trucks are actually traveling, i.e. the reasonable speed as determined by the drivers,” ODOT’s report says. “This may reduce speed variance between all vehicles, which may further reduce conflicts and crashes.”

Another thing that would reduce conflicts, or at least the impatience quotient among other motorists: If trucks could all start going the same speed, at least on the flats, so that none would feel the need to pass another by going just 1 or 2 miles an hour faster. (hh)