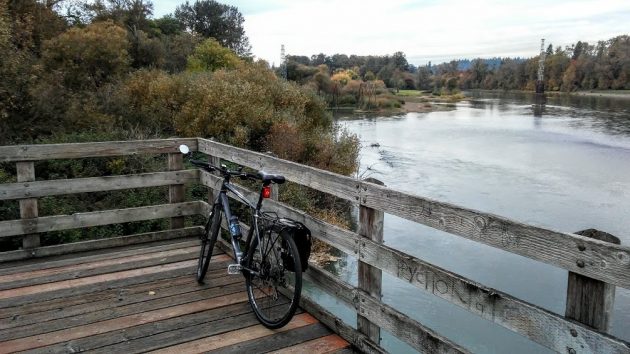 The view from a platform on Albany’s Willamette riverfront as it looked Monday.

A team of consultants led by Walker Macy, a Portland firm, now has the approval of Albany’s urban renewal agency to gather public opinion and then make plans for redeveloping the city’s Willamette Riverfront.

The city council, acting as the Albany Revitalization Agency, voted 5-1 Wednesday night to contract with Walker Macy at a cost not to exceed about $2.36 million. This was after the Central Albany Revitalization Area Advisory Board voted to recommend the contract. CARA board member David Abarr voted no, as did Councilor Dick Olsen.

Olsen preferred that CARA spend its money building projects that can be completed more quickly than the riverfront. He wants to hasten the day that CARA winds up and the improvements it supported start generating revenue for all the local taxing units.

Chelsea McCann, a principal in Macy Walker, and Kalin Schmoldt, a public involvement specialist working with the firm, explained the consultants’ role and answered questions. 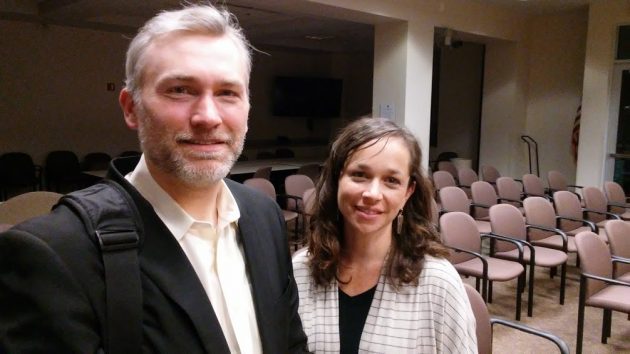 Kalin Schmoldt, left, and Chelsea McCann after their presentations at Wednesday’s CARA meeting.

One of McCann’s points was the importance of providing public access to the river itself. Schmoldt explained an elaborate system of using social media and other ways of making sure a wide cross section of the public takes part in the planning. His remarks satisfied Councilor Rich Kellum, who said that usually, the same few people show up at public-comment meetings.

There was much agonizing about the steep cost. But Councilor Alex Johnson II, among others, argued that investing in the planning would lead to improvements that would make Albany a better place for the children and grandchildren of his generation.

The planning is expected to take about a year. What will it cover? You can get all the details here. But this is what Walker Macy and an even dozen sub-consultants say they’ll deliver:

“The project includes the creation of a design vision and phased construction plans for the 24 acre Willamette River waterfront site in downtown Albany. The project will include plans for the park, street interface and adjacent 14 blocks of downtown streetscape and frontage to establish an integrated waterfront experience unique to the city.

“The team will participate in a public engagement process that will help inform the park programming and design elements, as well as provide the basis for the design vision. We anticipate site improvements will include streetscape redevelopment, pedestrian and vehicular circulation, lighting, architectural elements including restroom facility, site walls and structures, and plantings and irrigation. Additionally, we will explore opportunities to re-use or redevelop existing structures, including the stage and bandshell, pavilion and existing waterfront piers.”

Once it has buildable plans, CARA can put parts of the overall design out to bid. Total costs are unknown, but the ARA has about $20 million of borrowing and spending authority left.

There’ll be competition for some of that money. Two Albany nonprofits, CHANCE and Mercy House International, told the CARA board Wednesday they intend to request help with projects to restore their downtown buildings. And developer Scott Lepman served notice he would seek help with restoring the Spruce Apartments and the Old City Hall, along with a third downtown housing project he could not yet name. (hh)