Probably not what the builders expected 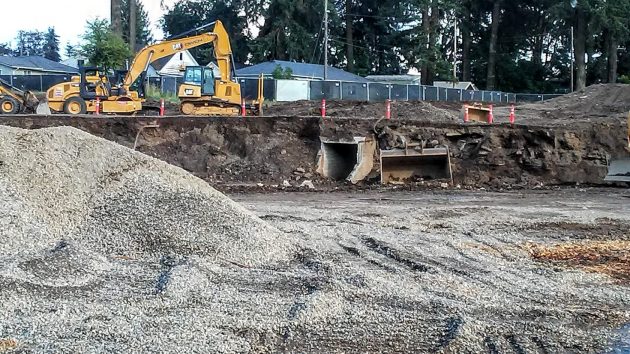 Looking at the construction site Tuesday evening from the riverside trail. The tunnel is in the center.

Preparing the site for the construction of The Banks apartment complex on Albany’s riverfront produced what may have been a surprise to the builders: They uncovered the opening of an underground void or tunnel.

Neighbors who have followed the construction told me about it, and I went to take look.

This used to be a sand and gravel operation 40 or 50 years ago. According to one longtime neighbor, the tunnel was used with a conveyor system to bring gravel up from the river. How that worked is hard to imagine now. But it apparently allowed the operators to drive equipment above and across the conveyor.

Later the property was used by another company, Permawood, which manufactured roofing tiles. Whether the tunnel was in use then, or covered over and forgotten, I have no idea.

In any case, the builders of The Banks presumably have to demolish the concrete structure and fill it in. You probably can’t build three-story apartment houses on a void in the ground below.

The tunnel was still there on Wednesday afternoon.

The Banks is a development of 120 apartments on about 6 acres fronting on the Willamette River between Bowman Park and Eads Park, at the north end of Geary Street.

The site was cleared of dozens of trees last month, and the builders and developers, led by Robyn and Patrick Morley of Salem, held a groundbreaking ceremony on May 25. The general contractor is CD Redding Construction of Salem. Owen Construction, also of Salem, is preparing the site.

Most of the neighboring property owners had opposed the project. But in a press release about the groundbreaking, the developers quoted Mayor Alex Johnson II as welcoming the addition of 120 dwellings to help mitigate the city’s housing shortage.

The developers expect to open The Banks to tenants in the spring of 2022. (hh) 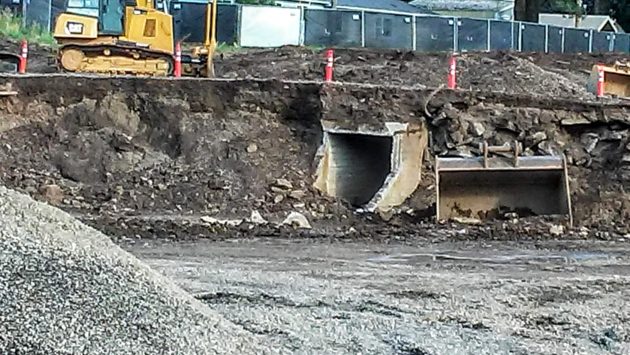 My phone’s digital zoom brings the tunnel a little closer.


5 responses to “Probably not what the builders expected”