In this video, you are riding with me on a section of Albany’s Periwinkle Path that is about to be rebuilt — whether it needs it or not, I’m tempted to add. 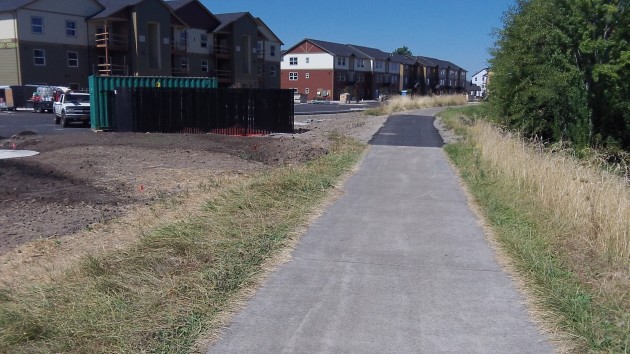 Part of the segment that will be rebuilt and widened. Oak Street Apartments on the left.

The city is advertising for bids to rebuild, and widen by two feet, 1,200 feet of the path from the southeast corner of Kinder Park past the new Oak Street Apartments to Queen Avenue. (I know this because I read the legal ad in the Democrat-Herald this morning. Who says nobody reads the legals, always stuck in the back of the paper in the smallest possible type?) Bids will be opened Sept. 10, and the city estimates the work will cost about $85,000. Completion is expected in October.

This is a segment of Albany’s first bike path, built in the 1970s along Periwinkle Creek. Except for a few cracks in the pavement, the path here is not really in bad shape. But the city is paying for the work partly with money from a federal block grant, and the segment lies within the part of town eligible for that kind of aid.

Parks Director Ed Hodney explains that the entire length of the path, from Oak Street to Grand Prairie, was assessed a few years ago, and much of it was considered to be deteriorating. The city rebuilt the section along the edge of Kinder Park in 2011, paying for it with a state grant and park funds, and widening it to the current city standard of 10 feet.

As or the rest of the path, Hodney says the plan is to continue replacing sections as resources permit. “This is likely to take several years to complete.”

No solution has yet been devised for one unrelated snag: For cyclists, the path practically dead-ends at Queen Avenue even though it resumes on the other side of the Queen/Geary Street intersection. Getting across that traffic hot spot is an adventure all by itself. (hh)