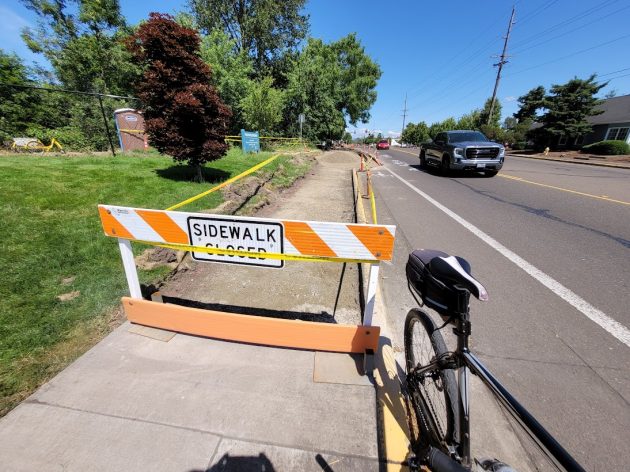 Looking east along Queen Avenue, where a contractor is building a “Safe Routes to School” project.

From the Periwinkle Bikepath to Geary Street, the sidewalk on the north side of Queen Avenue is torn up for the construction of a wider walkway that will double as an extension of the bikeway too.

I came across the site Monday, when of course no construction was taking place because it was the 4th of July.

Back on May 25, the Albany City Council awarded the contract for the work to Pacific Excavation Inc. of Eugene, which submitted the lowest of four bids at $337,845. The city staff estimated the total project cost at $412,500.

The contract calls for contruction of about 300 feet of “multi-use path,” 13 feet wide, connecting the Perwinkle Path to the intersection of Queen Avenue and Geary Street.

In addition, it provides for two “rectangular rapid flashing beacons” or RRFBs on Queen, one at Thurston Street and the other at Main. The beacons are intended to help people and especially children cross Queen Avenue safely if they walk to and from Sunrise School.

ODOT is paying $239,300 toward the cost under the Safe Routes to School program. The rest of the expense will be covered from the city fund that holds systems development charges for streets.

When the work is complete, bicyclists going south on the Perwinkle Path will be able to turn left at Queen and use the new and wider sidewalk to reach the signals at Geary Street.

It would be nice to know how many people on bikes use that route per day or per week, but no such tally is at hand. (hh)

The city staff prepared this map to illustrate the extent and location of the project. 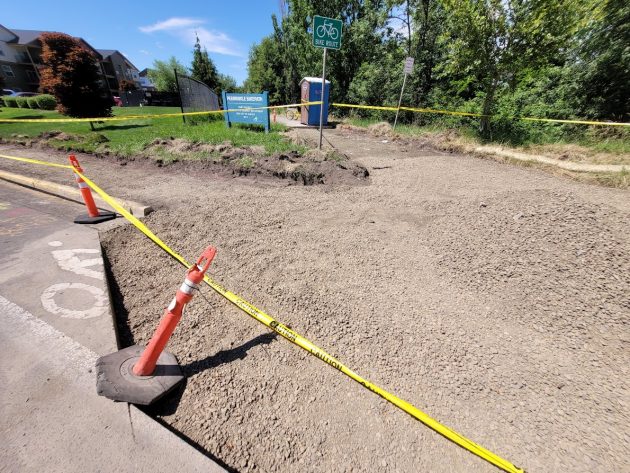 From here, the Periwinkle Bikepath goes north from Queen Avenue.


One response to “Periwinkle Path gets ‘multi-use’ extension”