On Day Three: Sprucing up a ‘secret park’ 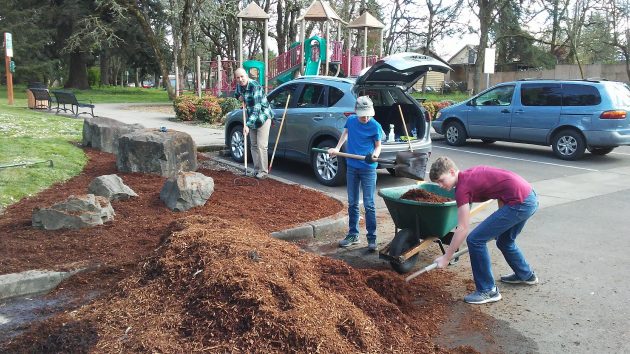 At Eads Park Wednesday: Matt Knecht and his sons Wyatt and Mason, right.

With schools out for weeks on end this spring, there’s only so much time you can spend with video games. So brothers Mason and Wyatt Knecht joined their Dad Wednesday in doing volunteer work outdoors.

On Day Three of the governor’s corona shutdown, I came across Matt Knecht and his boys spreading bark mulch at Eads Park.

Knecht, an optometrist with Eye Care Associates, says he’s been helping take care of the little-known park as part of Albany’s Adopt a Park Program for several years.

Eads Park lies way off the beaten path in the northeast corner of Albany’s Willamette Neighborhood. Knecht discovered it on one of his runs, and he and the boys call it their “secret park.”

It happens to be on one of my bike routes too, which is why I spotted the three working away on Wednesday. Mason, 14, Wyatt, 12, and their Dad were making steady progress spreading that bark. Until I interrupted them, that is. (hh)


8 responses to “On Day Three: Sprucing up a ‘secret park’”