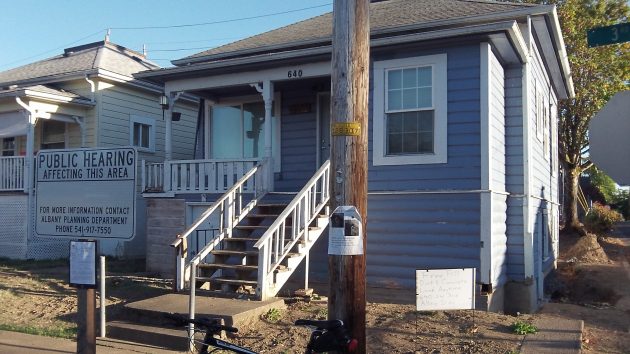 The stairs and railings won’t be the only things repaired or replaced under a renovation plan narrowly approved Wednesday.

The owners of a rattletrap old house in Albany’s Monteith Historic District have won approval to renovate the place, but it was a close call that threatened to get hung up on the material in new windows.

The city’s Landmarks Advisory Commission voted 4-3 Wednesday to go along with the city staff’s recommendation to approve the renovation of 640 Third Ave. S.W. as proposed by its owners, Pam and Kevin Ostby. It took Bill Ryals, the chairman, to break a 3-3 tie on the board, which held a lengthy and apparently contentious discussion on the issue of wood versus vinyl windows. (I had to leave the meeting for a while for another obligation, and when I got back, the vote had been taken and one of those favoring wood, Larry Preston, was gone.)

“It was an emotional decision for some of the commissioners, and Commissioner Preston left without explanation,” Planning Manager Bob Richardson told me later. “I assume he left because he was frustrated with the decision and possibly the format of a public hearing that limits collaborative discussions and negotiations with the applicant.”

The Ostbys, who over the years have renovated several other old houses in the vicinity, now live in Needles, Calif. In order to protect their investment on the rest of the block, they bought this place five years ago after it had been trashed inside and out. Kevin testified at Wednesday’s hearing.

The house dates from 1890, according to the city, and over the decades previous owners replaced the original windows with vinyl ones, most of them the wrong size and installed in odd places. The owners plan to install 10 vinyl windows of the historically correct size in the proper places to restore the house to its original appearance. They obtained bids and showed that wood windows would cost two or three times as much, and the planning staff recommended approval because of the difference in price.

Preston had argued that wood windows might not cost much more when all the related installation work was taken into account. When it came to approving the request, he voted against it  along with members Jolene Thomson and Kerry McQuillin. The three members voting yes were Cathy LeSuer, David Abarr and Keith Kolkow.

Ryals, an Albany architect, at first abstained but then sided with the yes votes. He said later it was a difficult discussion for the commission but with this renovation, the Third Avenue house will be restored and last “another 100 years.”

Even though no public money is involved, Albany requires review and approval by the Landmarks Commission of exterior changes on historic buildings in the city’s historic districts. Ryals suggested the board should talk some more, at another meeting, about its philosophy and approach. (hh)