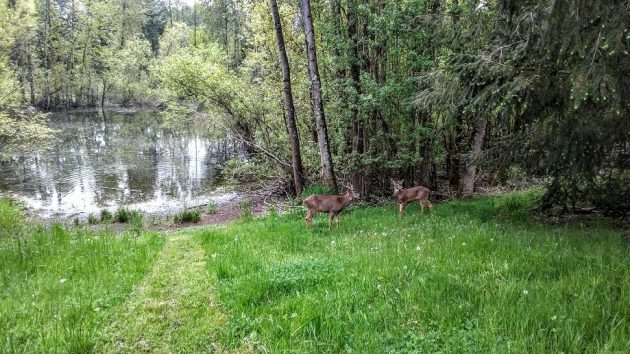 Animal life in the city: A file shot from May 2018 on a property off Hickory Street N.W.

Turkeys or no turkeys, a proposed ordinance making it illegal to feed wildlife in the city of Albany is not going to become law. But a ban on parking without a permit on sections of five streets near the Signs of Victory homeless shelter probably will, at least for a while.

The city council Monday pushed back against the wildlife proposal, and Mayor Sharon Konopa said it won’t be brought up as previously scheduled for action when the council meets Wednesday night.

Kris Schendel, the code enforcement official in the police department, proposed the wildlife feeding ban as one way to get rid of turkeys that cause a nuisance with their droppings and occasional damage to cars. The proposal did not apply to songbirds or waterfowl. But councilors wondered about the definition of wildlife and had other doubts.

Council members also had some doubts about a proposed ordinance to ban parking without a permit on several streets in the mostly industrial neighborhood southwest of the Signs of Victory shelter. But they seemed to agree to try it for six months as a way to get rid of vehicles whose occupants were causing problems.

Schendel said the complaint is not that homeless people sleep in their vehicles on those streets. It’s that businesses there have lodged complaints about finding needles, and people running naked in the street. The ordinance will come up for action Wednesday, with a sunset clause of six months.

Councilman Rich Kellum worried that the parking ban would push the vehicle campers into other neighborhoods. Others agreed but said they’d like to try this for a time. If it doesn’t work or causes problems elsewhere, they said, the permit system could be dropped.

A third amendment to the Municipal Code, also scheduled for Wednesday action, would allow the city to hold property owners responsible if people they allow to live in RVs on their property cause problems like dumping sewage or leaving trash behind.

The code allows people to live in recreational vehicles on private property for seven days without a permit and 90 days with one. But if there are problems, Schendel explained, the city now can try to cite only the people in the RVs, not the owners that allowed them to stay there. He reasons that if the property owners also face potential consequences, problems would be less likely to come up.

Like the parking ban, the RV amendment is intended to control problems that the police and code enforcers occasionally find. But just before the council met at City Hall, three or four homeless people without RVs or other vehicles were spread out on the sunny sidewalk of 11th Avenue, surrounded by all their stuff. (hh)


One response to “Council nixes ban on feeding wildlife”