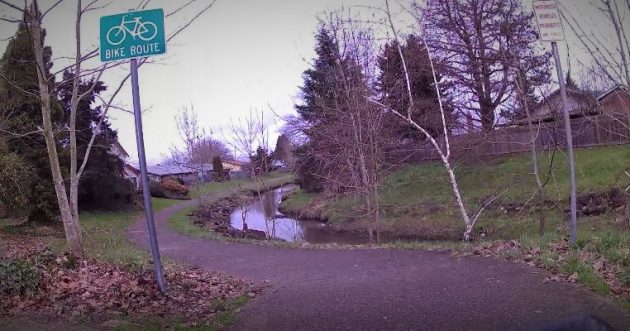 This is where the Periwinkle Bikepath takes off on Grand Prairie Road.

Anything new on the southern leg of Albany’s Periwinkle Bikepath? Not really, as I learned when I took a quick look on Saturday.

This section of the path goes northwest from Grand Prairie Road near Grand Prairie Park to the corner of Queen Avenue and Geary Street, near the former Megafoods supermarket.

As you’ll see if you join me on my nine-minute ride below, the path is still in pretty good shape even though there are big cracks in the concrete. They’ve been patched more than once since the path was built in 1977, and I think some sections may have been replaced.

I would have expected more people on the path on a mid-winter Saturday like this: mild temps in the 40s, wind light, rain absent, and a chance to get outside after being held captive by Covid all week.

Amazingly, unlike the northern part, this southern leg of the path was free of tent sites or other traces of homeless camps. The reason? Maybe it’s that there aren’t many bushes along the creek channel here.

At the end of the ride, at Queen and Geary, we come across the former Megafoods supermarket, still empty, and still for sale. A couple of years ago, at the request of the shuttered store’s owners, the city amended its zoning code to make it easier to use and thus sell the building. But evidently a buyer has yet to be found. (hh) 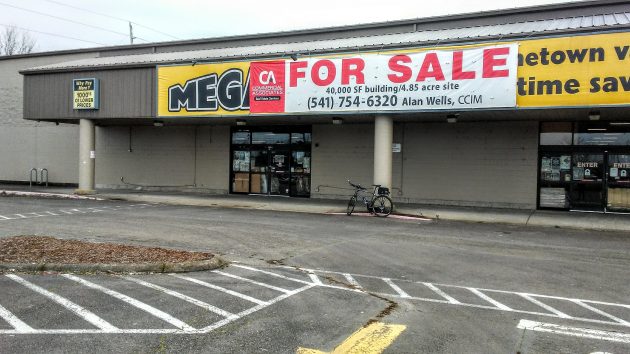 By the side of the path on Queen: An empty former supermarket.


5 responses to “Nine minutes on the southern Periwinkle Path”