Message on bridges: The rest of the story

Written May 26th, 2020 by Hasso Hering
Comments: one response. 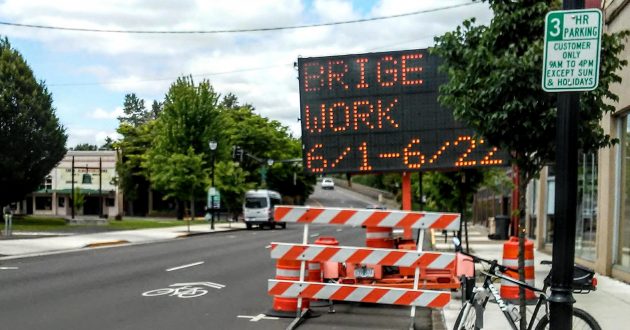 This is what you see this week as you head for the Lyon Street Bridge in Albany.

So what’s this bridge work that ODOT is telling us about on message boards at Albany’s two Willamette River crossings? In short, it’s a matter of fixing damaged beams on the Ellsworth Street span.

At ODOT’s district office in Corvallis, they didn’t answer the phone on Tuesday, maybe because everybody was still working from home because of the corona crisis. So I checked with Lou Torres, one of the department’s public information officers.

The message boards say the work will take place between June 1 and 22, but that may be an outside estimate. Torres didn’t know when the work would be done but expected ODOT would send out a press release when the start date is known.

The Ellsworth Street Bridge was built in 1925 and has a vertical clearance of 14 feet 11 inches. Over the years the cross beams have been hit many times, and ODOT intends to design or at least explore, by 2022, a project to raise the clearance to 16 feet.

The department’s Highway Division has budgeted $736,000 for getting the design done. This is a “shelf project,” meaning it will sit on a shelf until construction money becomes available.

The bridge was designed by Oregon’s renowned builder of highway bridges, Conde McCullough. It’s a handsome bridge. Let’s hope its clearance can be raised without taking away from this landmark’s classic looks. (hh) 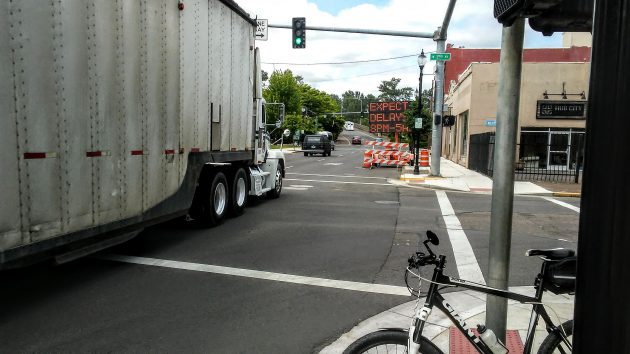 Two-way traffic on the Lyon Street Bridge will be only at night.

Traffic comes off the Ellsworth Street Bridge on Tuesday afternoon.


One response to “Message on bridges: The rest of the story”