Long saga’s next step: Fill the hole and sell it 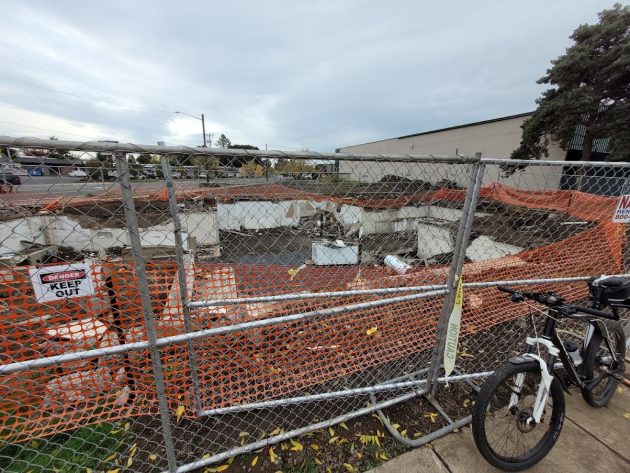 After the old Cumberland Presbyterian Church was moved, the basement looked like this on Oct. 20.

Having gotten rid of the old Cumberland Church by giving it to a nonprofit that paid to get it moved away, the city of Albany now has to deal with the hole that was left behind.

The city will have to demolish what’s left of the concrete basement walls — or leave them in place — and then fill the remaining space. “We are working on the plan for that now,” Public Works Director Chris  Bailey told me on Friday.

Then, she said, the plan is to sell the lot because the city has no use for it.

During the discussions over the last two or three years about how to dispose of the old church, Baldwin General Contracting Inc. had been mentioned as a possible buyer of the property once the building was moved away. The construction company has its headquarters next door on Santiam Road, where some years ago it converted an abandoned thrift store into a handsome modern building.

Bailey said that Yohn Baldwin, president of the company, contacted her and may be interested. But, she said, the city does not yet have plans for the sale.

She’s working to get the hole filled first. “Once we are ready to sell it, we will talk to the council about how they would like us to accomplish that.”

The cost, if any, of filling the hole is still unknown. “We are going to try to do the work ourselves if we can,” Bailey said in an email, “and I don’t have the details yet.”

The city bought the former church property at 401 Main St. S.E., at the corner of Main and Santiam Road, in 2000 for $150,000, intending to use it for a Main Street expansion project. Then the project was redesigned, and the property became surplus, a 20-year millstone around the city’s neck, a historic structure getting more dilapidated as the years went by.  (hh)


14 responses to “Long saga’s next step: Fill the hole and sell it”