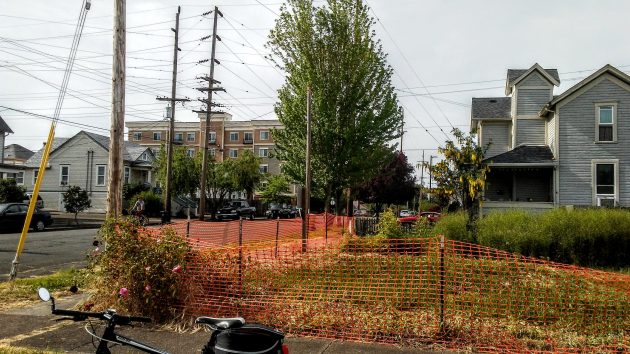 Two years ago the Albany Landmarks Commission refused to allow the demolition of three dilapidated old houses at Fourth Avenue and Calapooia Street. On the Tuesday night the same commission turned down a plan for two new buildings on the site as too massive and tall.

Landmarks members Cathy LeSeur, Jolene Thomson, Keith Kolkow and Kerry McQuillin, the chair, voted to the effect that the two proposed three-story buildings would not be compatible with the Monteith Historic District as required by the city’s development code. The two newest members, Chad Robinson and Claudia Dean, voted against the motion to reject the application.

Designed by Albany architect Bill Ryals for property owners Mark and Tina Siegner, the two buildings are to have commercial spaces on the ground floor and four apartments each on the floors above.

Meeting remotely for the continuation of a public hearing that started May 6, the Landmarks members suffered through the reading of about 35 letters or emails, with slightly more than half opposed to the project. As before, most of the criticism dealt with the size and height of the two buildings, 40 feet tall at the peak and half a story taller than a couple of houses nearby.

The critics included several former members of the Landmarks board, including two whom the council did not reappoint after they helped reject the demolition request in 2018, a request the council approved last year on appeal. They also included, among many others, somebody who recently moved to the Monteith district from San Francisco, the Friends of Historic Albany, and an official from the State Historic Preservation Office.

If you’re up to lots of talk and agonizing, you can find an audio recording of the proceedings here. For more details on the rejected project, as well as renderings, check previous stories on hh-today.

As before, the Siegners may appeal to the city council. Ryals said he would sleep on it before deciding in the morning what to recommend. (hh)


10 responses to “Landmarks says project is just too big”