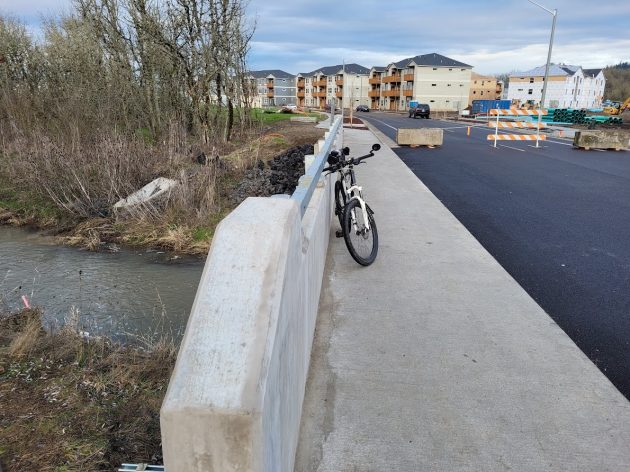 The new bridge on Timber Ridge Street over Burkhart Creek on Jan. 10, 2023. In the background, the North Pointe Apartments now being completed.

Largely out of sight from most of Albany, a key piece of a planned north-south street connection was completed last year on the east side of Interstate 5.

City transportation plans, including the East Albany Plan still being written, call for Timber Ridge Street to go all the way from Knox Butte south to Highway 20.

A few years ago, city engineers and the council considered forming a local improvement district to pay for building the bridge. But in the end, housing developers north and south of the creek got together and built it privately.

“Private construction is always less expensive than public construction due to prevailing wage requirement and administration costs,” said Ron Irish, the city’s transportation systems analyst. “The developers weren’t necessarily happy about the situation, but (fortunately for everyone involved, I think) decided private construction was better than public, negotiated a cost sharing agreement between themselves, and built the bridge.”

The concrete bridge is nearly complete, as far as I could see when the bike and I went across it on Jan. 10.

I had ridden out Knox Butte Road to see if the builders had finished the apartment complex at 225 Timber Ridge Street, south of the roundabout on Knox Butte.

Construction is not complete, I found. It’s a huge complex, with 12 three-story buildings, 264 units, and numerous related facilities including a pool.

While some of the buildings are still under construction, the first apartments are ready and rented. If you google North Pointe Apartments, you’ll learn they range in size from 728 to 1,190 square feet and rent for between $1,500 and $2,190.

(When construction started, the place was called Brandis Meadows Apartments, but obviously the name has been changed. There’s already a North Pointe development in North Albany, but I guess they didn’t copyright the name.)

As the new apartments demonstrate, that area of former farm fields on Burkhart Creek is rapidly developing.

North of the bridge, there are the North Pointe buildings east of Timber Ridge Street. On the west side of the street, there will be a 54-lot town home subdivision.

South of the bridge, there’s a phased subdivision of 169 residential lots. On 121 of the lots, construction started in 2019. On 48 lots closer to the creek, building had not yet started, as near as I could tell from the bridge.

While Timber Ridge Street is planned to be extended south to Highway 20, the timing depends on how soon the land along its route is annexed by the city and then developed.

Even now, though, you can use the bridge to reach points south by ziz-zagging through the Brandis Meadows subdivision streets to reach Goldfish Farm Road.

If you’re interested, take a drive or a bike ride through that area before it’s all built up. (hh) 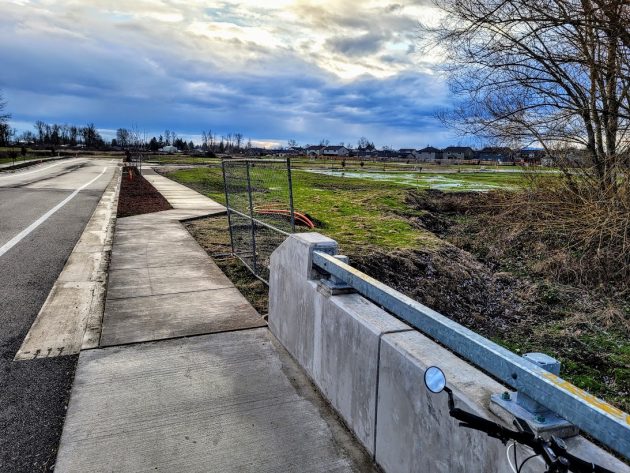 Looking south from the bridge toward subdivision land and finished streets that have no houses yet.


One response to “Exploring near new Burkhart Creek bridge”