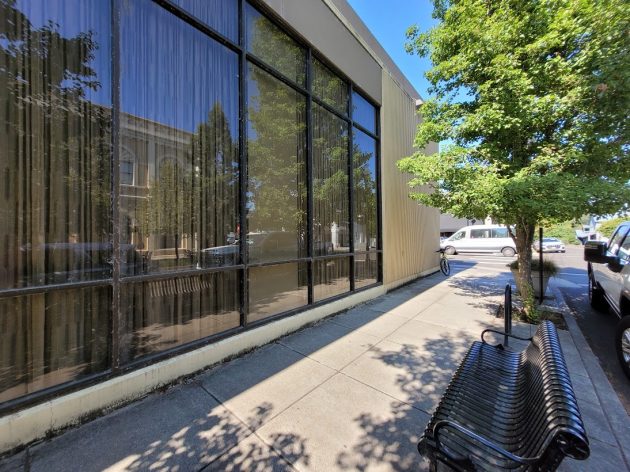 The Broadalbin Street frontage of the former Wells Fargo branch on Sept. 19. The city council (ARA) voted Monday to award a contract to demolish the building.

Monday’s meeting of the Albany Revitalization Agency was called to award a demolition contract for the former Wells Fargo branch downtown. It ended on a sour note when the chair, Councilwoman Bessie Johnson, formally accused member Dick Olsen of violating the secrecy of an executive session.

She read a prepared statement criticizing Olsen for comments he made at the Nov. 16  open session of the ARA, remarks that referred to discussions that had taken place at an executive city council session closed to the public on Sept. 14.

Johnson’s statement said council members are sworn to uphold all laws and to respect them. She implied that there was something illegal with talking about the substance of an executive sessions.

There’s nothing in the Oregon Public Meetings Law that says members of a governing body must maintain the confidentiality of executive sessions.

On Sept. 14, after reopening their closed meeting to the public, the city council voted 4-2 to “authorize the city staff to enter into negotiations for the transaction of real property within the city.” Olsen and Councilwoman Stacey Bartholomew voted “no.”

Just which properties are involved and with whom the negotiations were intended to take place was cloaked in the confidentiality of the executive session.

On Nov. 16, the council talked about the planned demolition of the former Wells Fargo branch downtown, and Olsen spoke up. He questioned just what the city would do with the site and its adjoining parking lot.

In that connection Olsen referred to the discussion during the Sept. 14 executive session. Mayor Alex Johnson II cautioned him that he was disclosing confidential stuff, and Olsen shrugged it off.

I attended the Nov. 16 ARA session in person but don’t remember word for word who said what. The audio recording of the meeting is no help because it has not been posted.

It’s a mystery why Councilor Johnson was persuaded to make a big issue of this.

Both she and Olsen this month lost their bids for re-election. And why a public reprimand of someone who served the city for most of the last 50 years? Especially since this rebuke calls attention to just what these confidential property negotiations entail?

Nobody in the public paid any attention to this alleged breach of confidentiality when it happened, and everybody who did had forgotten about it — until now.

Johnson adjourned the meeting after blasting Olsen. He didn’t respond. As far as I could see, watching online, he was no longer there.

Oh, by the way, before listening to this condemnation of its most senior member, the ARA voted to accept the low bid for the demolition of the former Wells Fargo branch at 300 West First Ave.

The contract goes to Willamette Construction Service, doing business as Laneco Demolition, of Portland. The bid was $238,000, the lowest of three.

Albany bought the property in 2019 for $1.5 million. Once the building is gone, the council hopes the city can sell the empty site, minus the parking lot, to someone who will build apartments there, maybe with commercial space on the ground floor. (hh)


17 responses to “Demolition meeting ends on a sour note”