Cyclists at the ‘gore:’ What to do now?

Here, at Pacific and the I-5 off-ramp, motor traffic from the rear catches cyclists in a pincer movement from  left and right.

That’s an awkward place for a bike lane to end, and apparently I’m not alone in thinking so. Someone made the same point to the Albany Bicycle and Pedestrian Advisory Commission.

Eastbound Knox Butte Road leads under the freeway before it becomes Pacific Boulevard or Highway 99E at the very point where a southbound off-ramp comes off I-5. Even seasoned cyclists may feel uneasy being delivered into the middle of two converging high-speed traffic streams, a feeling not assuaged by the realization that to engineers this highway configuration seems to be known as a “gore.”

When the bike/ped commission met in September, according to the minutes, Stephanie Nappa introduced herself as someone who had recently moved to a part of Albany east of I-5 and had problems finding a good cycling route toward downtown. “The most difficult spot is on Pacific … at the southbound off-ramp,” the minutes say.

Ron Irish, the city’s transportation systems analyst who serves as the commission’s staff, told me the board discussed the issue.

A long-term fix will have to await reconstruction of the interchange, something that ODOT is working on in the design stage. This would include reconfiguring the interchange by, among other things, adding a southbound on-ramp to I-5 and installing a signal at the off-ramp. But construction is years away. 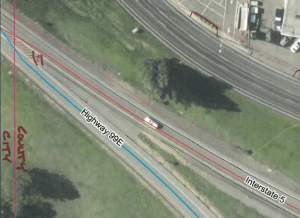 “A shorter-term treatment,” Irish says, “would be to modify the bike lane striping just west of the curbing at the gore point to something like what is shown on the attached sketch. The idea would be to stop cyclists at the end of the gore curbing and direct them across the off-ramp at a 90-degree angle. Cyclists would need to wait for a gap in off-ramp traffic before making the crossing.”

But getting this done, he adds, is complicated because the roads are controlled by ODOT and the site — the “gore”– is outside of both the city limit and, amazingly, the Albany urban growth boundary.

In reality and practice, though, the solution is not all that involved. When I reach that point on a ride, I stop so I can get a good long look up the off-ramp. When it’s clear, I hustle across to the other side and go on my way. Then I get off Pacific the first chance I get by making a right on Albany Avenue and following Salem Road into town.

Some striping and signage would be helpful, I guess. But in the meantime, my solution works and costs nothing at all. (hh) 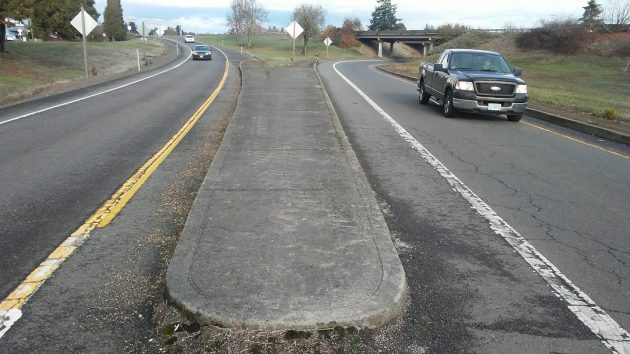 The view upstream from the end of the “gore” curbing.