Cross that bridge and remember a pioneer 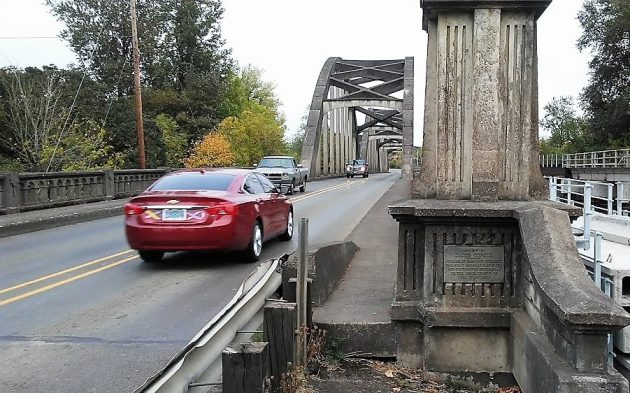 To read this plaque, you have to cross this bridge on foot, which I did on Sunday. Having read it, though, you’ll want to call the Jefferson bridge over the Santiam by its proper name henceforth.

It’s the Jacob Conser Bridge, named for the pioneer who crossed the continent to the Willamette Valley on the Barlow Trail with the intrepid emigrants of 1848.

People in Jefferson obviously know about Jacob Conser, who operated a ferry across the Santiam, served in the legislature, founded their town, became its mayor, and accomplished many other things, besides starting the Oregon clan that bears his name.

Motorists driving across it daily may not know that the bridge is the third in that place. It was one of the last designed by Conde B. McCullough, the legendary state bridge engineer who perfected the use of concrete reinforced with steel bars in Oregon bridge construction from 1919 into the mid-1930s.

The previous steel bridge there, on the Pacific Highway, was deteriorating. It was also damaged by two car accidents blamed on its width, a mere 16 feet. McCullough and others decided that rather than fixing the bridge, they would build new one. In 1932 they designed a concrete through-arch span. The Clackamas Construction Co. of Oregon City got the contract, and in 1933 the new bridge was done, with a road deck measuring 24 feet curb to curb and a maximum clearance of 20 feet six inches.

The cost was about $100,000. The money came from Uncle Sam, granted by the Public Works Administration under the National Industrial Recovery Act of 1933.

There’s more about the Conser Bridge, including all kinds of technical details, in a 1992 report for the Historic American Engineering Record (HAER OR-42) compiled by the National Park Service. You can find it online here.

I wouldn’t have looked it up had I not walked across the bridge and back on Sunday for the previous story on this site. Because then I would not have seen that plaque. It’s at the foot of the pylon at the bridge’s western entrance, on the south side of the road. (hh) 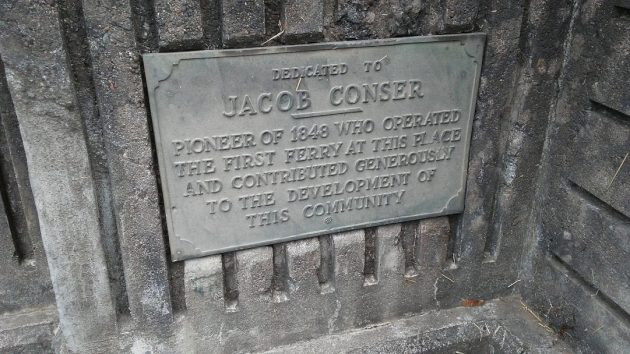 
12 responses to “Cross that bridge and remember a pioneer”