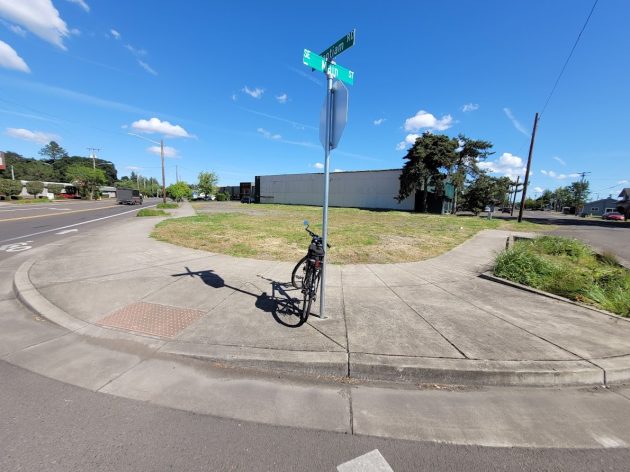 This is the lot at S.E. 401 Main St. the city council sold on Weddnesday.

The former site of the historic Cumberland Church in Albany will go to Baldwin General Contracting, which owns the property next door.

Yohn  Baldwin appeared at a public hearing on the property sale and reiterated his plans for the triangular lot at Main Street and Santiam Road, just down Santiam from his company headquarters and next door to a warehouse he owns and plans to convert to commercial spaces.

Baldwin previously offered $10,000 for the city-owned lot, and Albany developer Scott Lepman then offered $45,000. But the council in May kept the matter open, saying it wanted to allow time to get more offers.

By Wednesday, a third offer had come in, from Albany real estate investor Josh Mitchell, for $25,000, and Baldwin had increased his offer to $50,000.

Lepman also increased his previous offer, to $52,500. In written material he suggested the lot could hold street-level retail space and three townhouses on top, which appealed to Councilors Johnson and Kopczynski.

Baldwin had told the council that because of its shape and size, and development code requirements, the former church lot was unsuitable for anything other than a parking lot for the businesses he plans to develop in the adjacent warehouse. He also plans a little “pocket park” at the tip of the triangle where Main and Santiam meet. And he has said he’ll do this in a matter of months.

It was Baldwin’s offer that the council voted 4-2 to accept. The majority (Smith, Novak, Olsen and Bartholomew) was impressed that his plans for the property are clearly feasible, would reduce the number of curb cuts on Main and Santiam, and would help develop the warehouse as stores or offices, adding value quickly.

Baldwin also was the only one of the buyers who appeared in person.

The former old church that sat there for 129 years was moved last fall and now awaits restoration at Santiam and Pine, a few blocks from the corner of Santiam and Main. More on that project when there’s something to report. (hh)