City: Cutting trees to save the sidewalks 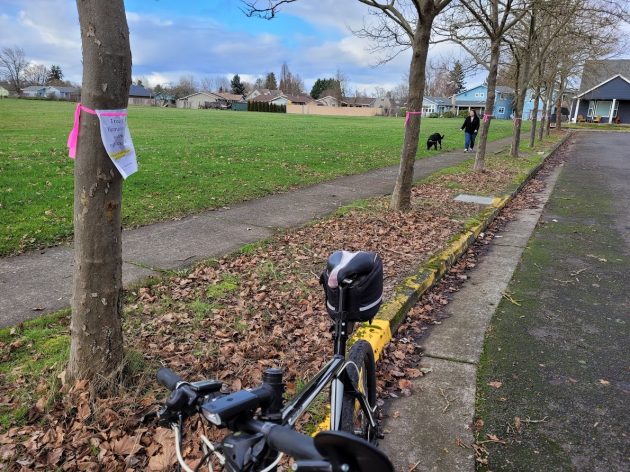 Pink ribbons mark all the trees along 22nd Place SE on Jan. 16. The sign says the sycamores will be “removed for sidewalk replacement.”

The Albany neighborhood between Periwinkle Elementary School and Waverly Drive is about to lose its mature street trees. At least one homeowner wishes the city would leave the trees be.

Joyce Thompson Graham lives in the neighborhood and sent me an email about the planned tree felling, and on Monday the bike took me there to take a look.

Pink ribbons marked 35 sycamores on 22nd Place and 22nd Avenue S.E. A few had signs saying the trees are to be “removed for sidewalk replacement.”

Houses on the streets were built over two or three years starting in 1997, so the trees are probably about 25 years old.

According to the minutes, the Albany Tree Commission was told in October that the sycamores in the neighborhood had become too big and were destroying the sidewalks. Some were removed and other trees planted two years ago, and the remaining ones were to be taken out now.

Some of the trees border a grassy field belonging to the school, and the sidewalks there look undamaged.

“The mature trees provide shade for people who use the field, provide habitat for birds, provide benefit to land and water systems, lower environmental temperature, and make an attractive neighborhood,” the homeowner’s email said. “Just look at how ugly 21st Street off Waverly looks now, shorn of all the beautiful tree canopy.”

“I have lived in old neighborhoods with established trees most of my life,” she wrote. “Only upon moving to Albany have I seen a city so bent on cutting trees down.”

I asked Rick Barnett, the park and facilities maintenance manager and city forester, for a response.

“We wouldn’t take the trees out if we didn’t have to,” he wrote. He also explained, by email, as follows:

“The tree removal (and replacement) is part of a project we started on 21st a few years ago.   We started on 21st because it was worse and now we are finally able to move around to the rest of the project. We have to do it this time of year because our street crew does the concrete and sidewalk replacement work and their only availability is early in the year.

“These trees have grown large very quickly and will continue to grow larger.  Sycamores should have never been planted in these planter strips and now unfortunately they need to come out. When we were going to do this project before, we put flyers out and spoke to several of the homeowners.

“The bottom line is that the trees are destroying or will destroy the sidewalks as the trees get larger. This destruction and the unsafe conditions it creates will happen sooner than later. For instance two years ago I looked at the trees at 2765 22nd and thought we probably could get by without removing them. I looked at them Friday and they are causing minor (which will soon turn into major) sidewalk damage.

“I understand the homeowner concern. We don’t want to spend the time and resources to remove the trees and be looked at as bad guys in the process, but it is necessary to provide for public safety. Since we know the rest of the trees are going to cause problems in time it makes the most sense to do it all at once.”

In October, Barnett told the parks commission the trees replacing the sycamores most likely would be redbuds.

Redbuds are flowering trees said to be ideal along streets and sidewalks. They grow about 1 or 2 feet a year and reach a height of 20 to 30 feet. “They are strikingly beautiful, attract beneficial insects, have medicinal uses, are drought tolerant, are low-maintenance, and are available in different species,” one online source says.

Twenty-some years ago, when the area was developed, the city must have allowed the sycamores to be planted. “It was before my watch,” Barnett said. “We wouldn’t now.” 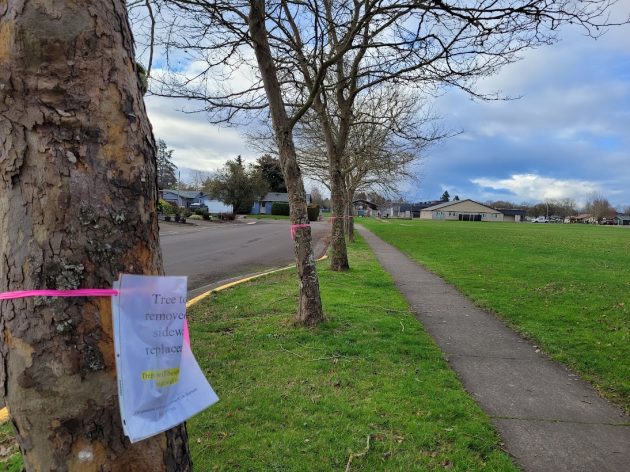 Trees along 22nd Avenue S.E., with Periwinkle School in the background.


10 responses to “City: Cutting trees to save the sidewalks”