At Freddy’s, plastic bags on way out 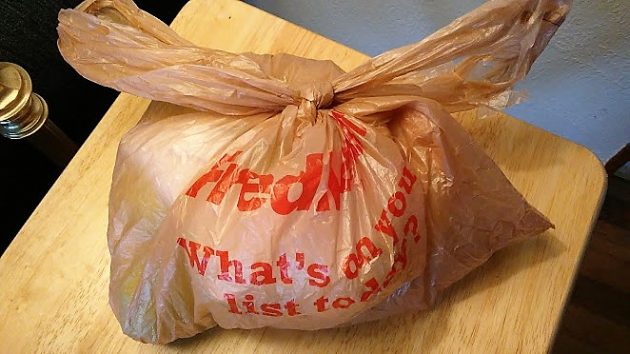 Single use? Not always. This plastic bag holds bug-infested, rotten pears ready to be disposed of.

No idea for how much longer you’ll be able to get plastic bags like this at the Albany Fred Meyer, but its parent company says it will stop giving them out in no more than seven years.

The Kroger Company announced Thursday it will phase out single-use plastic shopping bags by 2025. Kroger is one of the country’s biggest grocery conglomerates. Fred Meyer is one of its chains. Ralphs in Southern California is another.

This is supposed to be good for the environment, and maybe it is. But if so, why take seven years to make the change? My guess is that Kroger announced the long lead time so that other chains will be encouraged to follow suit. Otherwise, Kroger customers who like the convenience of plastic shopping bags might switch to stores that still offer them.

Convenience? Yes, because those bags are useful. They line waste baskets. They hold all kinds of stuff, sweaty clothes after a bike ride, for example. Or, in my case now, daily loads of rotten pears that have fallen off the tree and need to be picked up lest they attract whole squadrons of aggressive wasps.

Still, it’s hard to argue with asking people to bring their own shopping bags or — like they do in Corvallis — to pay a nickel each for paper bags. After all, people got their groceries home before plastic bags became common. We can do so again.

No matter how many other uses we find for plastic shopping bags, over time we accumulate far more than we can use. And most are too flimsy for anything but very light duty. So we end up with bundles of filmy plastic that end up in the trash.

Anyway, up to seven years. That’s how long Fred Meyer shoppers have to get used to the idea of no longer coming home with wads of plastic film. (hh)


14 responses to “At Freddy’s, plastic bags on way out”