And now, a site plan at 4th and Calapooia 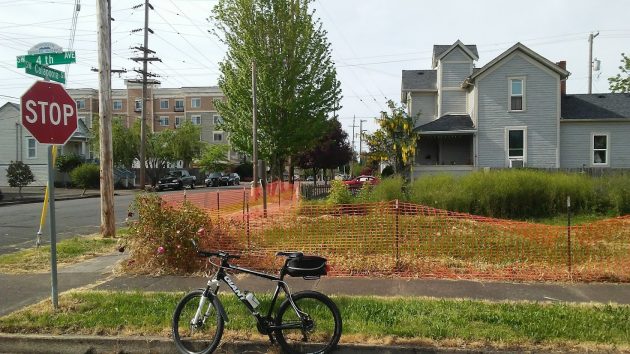 The corner of Fourth and Calapooia in May 2020. It looks about the same now, except that the orange netting has sagged.

The northeast corner of Fourth Avenue and Calapooia Street in Albany has been in the news for years, but not lately. So how about an update?

As it happens, on Jan. 21 the city’s planning division issued a public notice that a request had been filed for site plan review and consolidation of two lots there. Owners within 300 feet were notified and have until Feb. 4 to send in comments. After that, the planning staff will act on the request.

As you may remember, the owners, Albany builders Mark and Tina Siegner, plan to construct two three-story buildings on the site, with commercial space on the ground floor and eight apartments above, four in each building.

The buildings are planned where three old and dilapidated houses were demolished in June 2019. The demolition had been denied by the city’s Landmarks Commission but was twice approved by the city council, the second time after an appeal to the state land use board.

More recently, the council approved the “historic review” of the proposed buildings, also following an appeal by opponents to the state.

The site plan includes one lot facing an alley north of Fourth. The alley would provide access to a trash enclosure and parking for four cars and, under cover, for six bicycles.

The plan shows the building at 525 Fourth S.W. would be built as Phase 1. The one at the corner would be Phase 2.

It was four years ago, in early 2018, that the Siegners bought the property, on the edge of the Monteith Historic District.

This was after the city had condemned the old houses there and declared them uninhabitable.  Getting the site plan approved now will mark progress in getting something built in their stead. (hh)

One of the elevations attached to the site-plan filing still shows the project’s old name.


7 responses to “And now, a site plan at 4th and Calapooia”