Albany parks, a playground for turkeys 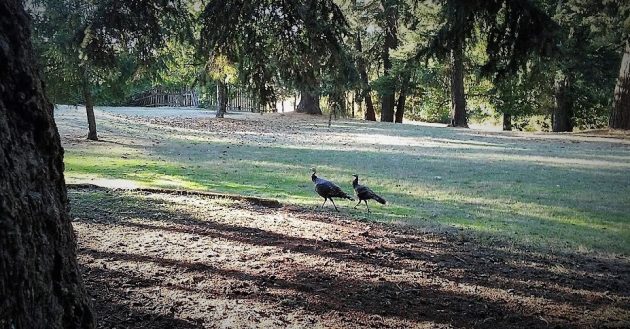 A couple of wild turkeys make their way across Eads Park on Sept. 14.

On my riverfront bike route the other day, I was surprised to see two wild turkeys in Eads Park. A couple of days later they stuck around long enough for the long-distance images you see here.

Even though I ride through that little park on the eastern riverfront two or three times a week, this was a first for me, but it seems turkey sightings are routine.

“It is the first I have heard of them at Eads Park but it doesn’t surprise me,” Rick Barnett, who’s in charge of Albany park maintenance, told me. “We had several in the back part of Timber-Linn Park this summer. I assume they are still around but haven’t seen them for a little while. We have had them in Hazelwood and Bryant on occasion. I think I heard the (Willamette) community gardeners say they have some in the neighborhood.”

So turkeys seem to be regular residents of the riverfront and at least some of the city’s parks.

“I would also guess that we have them in some of our other parks that provide good habitat,” Barnett added, such as Teloh Calapooia and Simpson parks along with the Oak Creek and East Thornton Lake natural areas. “They are a pretty hearty bird and seem to be expanding their territory.”

I asked Dala Rouse, a neighbor of Eads Park, about turkeys there.

“There are just the two now, but there were more earlier in the year,” she reported. “Don’t know what happened to the others.”

All kinds of birds and other wildlife are nothing new in that neighborhood, close as it is to the woodlands that line the Willamette River. “We love the animals that come up from the river,” Rouse wrote. But not all of them: “Many years ago we had a coyote walk up the street, but I guess he decided he wasn’t welcome, which was a fact.” (hh) 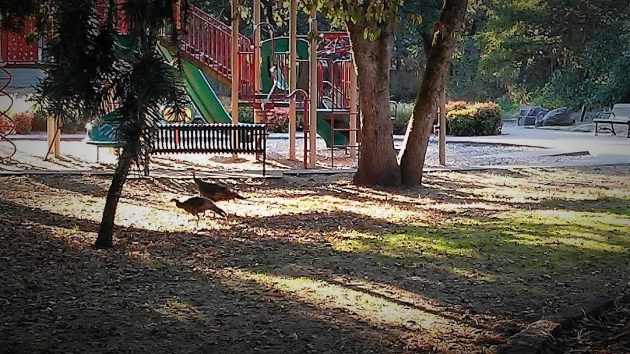 On this afternoon the turkeys had the Eads Park playground all to themselves.


4 responses to “Albany parks, a playground for turkeys”