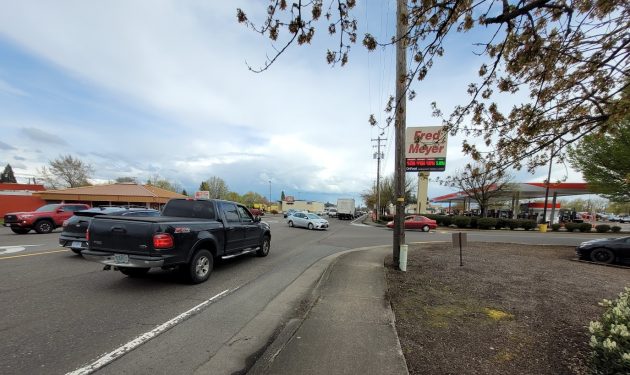 On Thursday, looking east on Santiam Highway, whhere ODOT is about to install raised medians to separate traffic.

Some left turns will become impossible on Santiam Highway between Waverly Drive and Clay Street in Albany once ODOT gets through with a safety project there.

The transportation department said it started work this week on two Albany projects. The work is being done at night, between 7 p.m. and 6 a.m. Sunday through Thursday, which may be why I could see no sign of it on Thursday afternoon.

One project is on U.S. 20 or what Albany calls Southeast Santiam Highway. The work there calls for new signals at the Waverly Drive intersection, four sections of traffic separators between the east and westbound lanes, and a new sign structure at Ninth Avenue and Geary Street. All of it is budgeted for $4.1 million.

“This is a safety project designed to lower the number and severity of crashes in the area,” said Angela Beers Seydel, an ODOT public information officer. “New lights should help drivers be able to see better, and the raised median will separate vehicles.”

“Yes, left turns will be restricted onto U.S. 20 from Davidson, Ermine, and the Fred Meyer parking lot near the gas station,” Beers Seydel told me.  “There are additional traffic separators on either side of Waverly that will restrict some left turns at a few other businesses.”

Her summary: “It’s always tough to change how we’re used to traveling, but hopefully this will help everyone get where they’re going more safely.”

The other ODOT project now starting is at Pacific Boulevard (OR 99E) and Airport Road. There, ODOT is realigning Airport Road, adding a left-turn lane, and replacing the traffic lights with an upgraded version. This is costing about $1.9 million for design and construction.

ODOT says the state’s safety priority index system has shown a crash rate higher than normal in both these locations. When the projects are complete, drivers will learn how much of a difference, if any, these changes make. (hh)


9 responses to “A safety project on Santiam: Limiting left turns”