A plan for the corner of Santiam and Main

Santiam Road on the left; Main Street on the right. Question: Will this corner be developed as proposed?

Yohn Baldwin has filed the site plan for a proposed development on the corner of Santiam Road and Main Street in Albany. But whether the project goes ahead may depend on how much the city requires to be done on Main.

The property is the former site of the historic Cumberland Church, which was moved a quarter mile down Santiam Road in 2021. Baldwin is the president of Baldwin General Contracting Inc., based next door to the former church site on Santiam.

His real estate company, Benjamen Properties LLC, bought the now-vacant church lot from the City of Albany last year. It is also buying an adjacent warehouse from the Linn-Benton-Lincoln Education Service District (ESD).

Now Baldwin hopes to combine the corner and warehouse lots, refurbish most of the warehouse as a fitness club, and build a parking lot where the church was. A stormwater retention basin is planned on the lot’s northern tip.

On the west side of the warehouse, Main Street was never improved. The change of use, from warehouse to something else, apparently triggers a city requirement that Main be upgraded to current city standards.

Baldwin says he’s already spent about $100,000 getting to this point, including architectural plans. If the city sticks with the Main Street requirement, he told me Tuesday, “I may not be able to do the project.”

He also said he was still trying to work something out.

The city’s Planning Division posted a public notice of the site plan review application last week and said it had notified neighbors within 300 feet. The deadline for commenting on the proposal is Feb. 1. (hh) 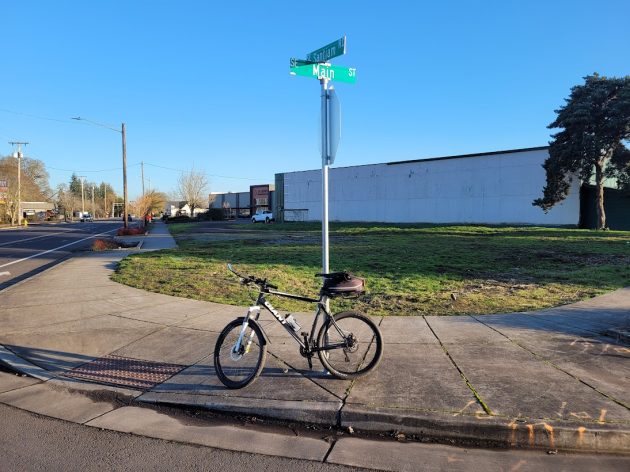 The warehouse would become a fitness club, with big windows in what now is a blank wall.