A hearing on two doors: It wasn’t much 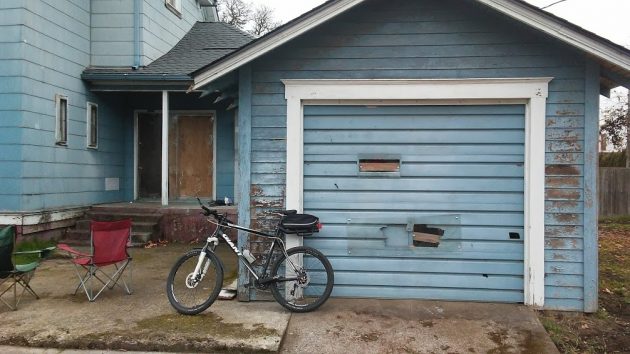 The slider on the left and the garage door required hearings before the Landmarks Commission.

When the Albany Landmarks Commission convened last Wednesday night for two “quasi-judicial public hearings” about minor repairs to an old house, it was over pretty quick.

A city planner summarized his eight-page staff report. The applicant, Greg Schneider, said a few words. No one from the “public” showed up. Members of the landmarks board asked no questions. They thanked the applicant for fixing up the old house at 732 Fourth Ave. S.W., in the Monteith Historic District.

Then the commission members voted unanimously to approve his request for an “exterior alteration” to replace a plexiglass slider and its aluminum frame with a wood-frame French door, and his request to use a “substitute material” to replace a damaged fiberglass garage door with a roll-up door made of steel.

The whole thing was over in 10 minutes. But it required the attendance of six of the volunteer members of the Landmarks Commission and three officials from the city’s planning division. It meant the applicant, who lives outside of Scio, had to be there too

I was there just to see what would happen since I had written a story questioning why the city requires “quasi-judicial” hearings for simple repairs to historic structures. Schneider wondered about that too. As I understood him afterward, he doesn’t object to the city reviewing changes to historic houses, but why can’t this be done administratively on simple repairs like this?

It’s the wording of the Albany development code that appears to require a full-blown public hearing procedure on “exterior alterations” or the use of  “substitute” materials on historic structures. But you’d think the code could be changed to avoid the delays and expense involved in quasi-judicial hearings when all somebody wants to do is replace a wobbly old slider and the broken door of a garage? (hh)


4 responses to “A hearing on two doors: It wasn’t much”