4th and Calapooia: Another step in this saga 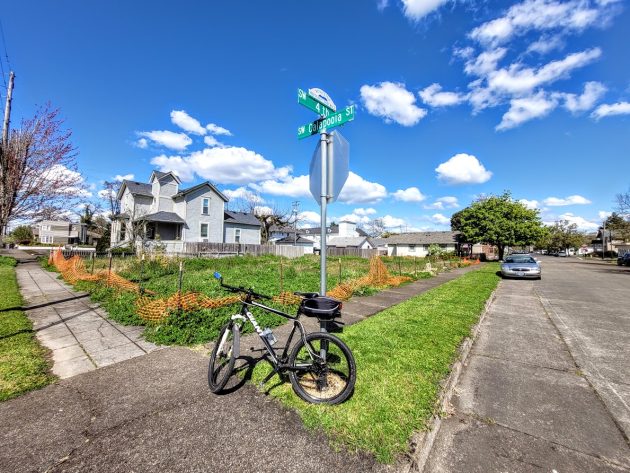 The northeast corner of Fourth and Calapooia on Friday afternoon.

If you’re like me, you look forward to the day when the property at this Albany street corner will drop out of the local news. But that day is some time off.

Albany builders Mark and Tina Siegner bought the property on the northeast corner of Fourth Avenue and Calapooia Street in early 2018.

They soon discovered that restoring three dilapidated historic houses on the site, previously condemned by the city as dangerous buildings, was not commercially feasible.

Since then they’ve fought, first, for permission to demolish the houses and then for approval to build two three-story buildings in their place. They call their proposal Calapooia Commons.

All along, their plans have been opposed by Friends of Historic Albany, who first tried to prevent the demolition and then, having lost that battle, objected to the proposed replacement as too tall and generally incompatible with the neighborhood.

The property is in the Monteith Historic District and zoned “downtown mixed use.” The two proposed buildings would have commercial space below and eight apartments above, two each on the two upper floors.

Now, on Friday, the Albany Planning Division announced it had approved a site plan for the project.

One of the opponents of the development has been Camron Settlemier. During a public comment period that ended on Feb. 4, Settlemier raised several objections to parts of the site plan. One of them was that bike parking shown on the plan would require approval by the Albany Landmarks Commission.

“There are no bicycle parking structures anywhere in the Monteith Historic District,” Settlemier wrote.

In response, David Martineau of the planning division wrote, “A condition of approval has been added to ensure that either the bicycle parking shelters are 100 square feet or less in size (exempt from historic review), or the shelters will require historic review prior to issuance of a building permit.”

A couple living nearby had commented that the plan didn’t adequately address parking. Martineau responded that the city development code does not require any off-street parking in this location but that the plan calls for four off-street spaces anyway.

Approval of the site plan is subject to appeal within 10 days.

Barring an appeal or other delays, the next time you’ll see something about Fourth and Calapooia on this site is when somebody clears the site and construction begins. (hh)


4 responses to “4th and Calapooia: Another step in this saga”