Working on a NA traffic solution 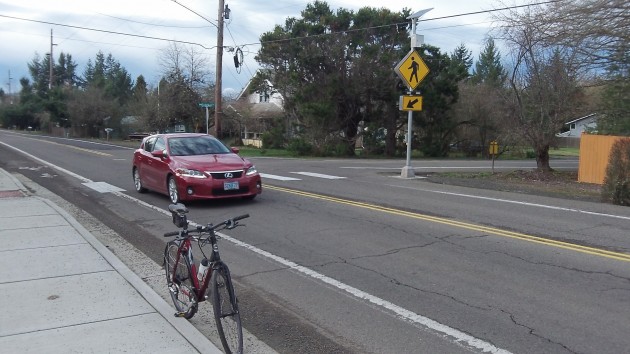 The T-intersection of Gibson Hill and Crocker in North Albany is often busier than this.

North Albany commuters may be glad to learn that traffic experts are looking at the intersection of Gibson Hill Road and Crocker Lane, where making left turns often involves a considerable wait.

The city of Albany commissioned David Evans & Associates (DEA), Portland, to evaluate five ways of changing the intersection so it can handle traffic more quickly and safely. Ron Irish, Albany’s transportation systems analyst, says these are the options: All-way stop; traffic signal with single-lane approaches; signal with turn lanes; a full-size roundabout; or a mini-roundabout.

DEA has prepared the draft of a report, and the city’s Traffic Safety Commission will get a look at it Monday (10 a.m. in the Periwinkle Room, City Hall.)

During the peak traffic period on weekday afternoons, vehicles entering the T-intersection from the three possible directions total about 1,000. That’s expected to increase to nearly 1,300 vehicles by the year 2040 with continued residential development in North Albany.

The biggest problem now is making a left from Crocker when Gibson Hill is busy. “The delay for that movement will increase over time due to more drivers wanting to make the movement (because of development to the north) and fewer gaps on Gibson Hill because of increasing through movements from both development and out-of-area traffic,” Irish says in an email. Also, there are frequent delays on Gibson Hill when drivers wait for a gap in oncoming traffic to make a left on Crocker.

The DEA report evaluated each option based on how well it would work in terms of capacity, avoiding delays and so forth; its right-of-way impact and cost; and safety. But so far it makes no recommendation.

The city staff expects to get a final version of the report toward the end of February and put it before the city council in March. If the council gives the go-ahead, getting something done will depend on the option chosen. A three-way stop — considered only a short-term solution — could be put in right away. Depending on the need for additional right of way, other options would take longer, and building a roundabout might not be possible until 2018. (hh)

3 responses to “Working on a NA traffic solution”