Why this widening? Because … 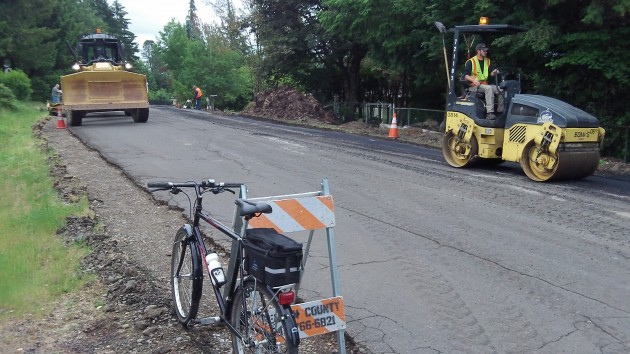 Benton County road crew at work on the Robin Hood Lane widening project on May 23.

On Saturday a couple of readers asked the Answer Man why Benton County was widening Robinhood Lane in North Albany. The Answer Man asked people who know, and now their replies are at hand.

Public Works Directors Josh Wheeler of Benton County and Jeff Blaine of Albany reminded me of an agreement between city and county to transfer several county roads to the city’s ownership and jurisdiction. The agreement calls for those streets, Robin Hood among them, to be improved before the transfer takes place.

“The city asked us to inquire with residents if Robin Hood should be widened similar to Squire,” Wheeler wrote in an email, referring to a street one block to the north. “We held a public meeting and met with residents individually, and it was determined that widening was desired.”

The work started last week and continued today. Later, in the summer, the street will get a two-inch pavement overlay. According to Blaine, the city is interested mainly in the new pavement because it would like to avoid having to spend big sums on maintenance as soon it takes over the street.

According to the intergovernmental agreement, the street is being widened to about 26 feet. “The widening was included in case that was something that the neighborhood wanted,” Blaine wrote. If the neighborhood had not wanted the wider street, he added, the city staff would have been OK with just the overlay.

Ron Irish, the city’s transportation systems analyst, added this observation: “The widening would make the street look pretty much like Squire to the north. The design allows for adding 4-foot striped shoulders to both sides of the road. There are no sidewalks on those streets. Residents on Squire are using the shoulders as informal sidewalk/bike lanes. The choice was left to the residents along Robin Hood, and they apparently liked the idea of making it look and function like Squire.”

Which leaves only the question of spelling. The city map calls it Robin Hood Lane. But the street signs say Robinhood. (hh)


6 responses to “Why this widening? Because …”