Why old OER railway depot is locked up 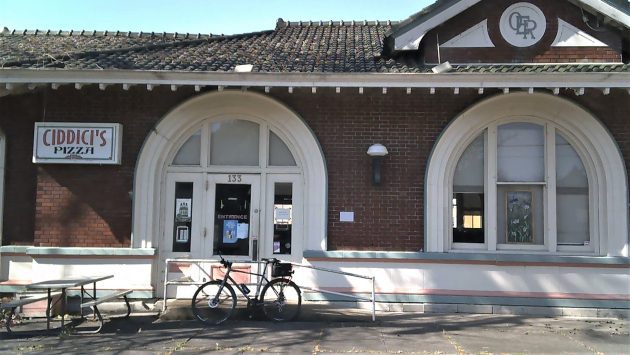 A reader wondered why the historic Oregon Electric Railway station in downtown Albany was closed. Is it unsafe or condemned, she wanted to know. No, I checked and it’s nothing like that.

I had not realized the building was locked up until, prompted by the question, I stopped by this week.

On the door there was a sheriff’s notice dated Feb. 3.  It said the occupants had been evicted pursuant to a Circuit Court order, and any unauthorized person entering would be arrested.

Access to court records at the Linn County courthouse is limited to four hours a day because of Covid. But the next day I got a copy of some papers in the case.

The old railway station at 133 Fifth Ave. S.E. was built in 1912. For about 20 years or more, if memory serves,  it has been the home of Ciddici’s Pizza, which Tariq “Tim” Siddiqui started in the old PayLess Building downtown.

Tim returned to his native Pakistan and has lived in Karachi for the last six years. His brother, Hamid Siddiqui, has operated the pizza restaurant on Fifth, a second one on Belmont Avenue in south Albany, and a third in Corvallis.

The case resulting in the eviction involves two companies, one managed by Tim and the other by Hamid. Tim’s company, in which his brother also has an interest, sued the other over unpaid rent for the Fifth Avenue building.

The Ciddici’s restaurants in South Albany and Corvallis continue to be open.

What will happen to the OER depot, which is listed in the National Register of Historic Places? We’ll just have to wait and see. (hh)


8 responses to “Why old OER railway depot is locked up”