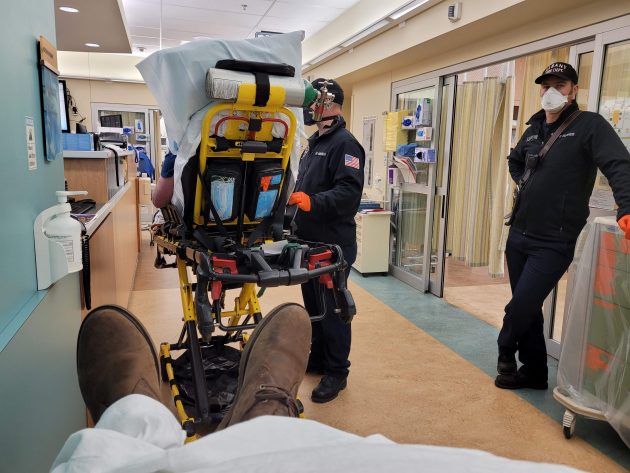 My view of an Albany ambulance crew waiting with their patient in the Good Sam Emergency Department Friday afternoon.

You can’t know how excellent a service the ambulance crews of the Albany Fire Department provide until you try it out. Twice in the last two weeks I had the unwelcome opportunity to do just that.

We called 911 because my heart was acting up. After a few days in the Corvallis hospital, I went home with a pacemaker. Then there was a second ambulance ride because something didn’t seem to be right.

On the ride over there, I said something about regretting that I was taking them out of their way because we had to go to Corvallis. That’s nothing, was the response. In the last few days, they had made several runs to distant places, among them Hood River in one direction and North Bend in the other, because hospital beds were in short supply.

When we arrived at Good Sam, two Albany ambulances and one from Corvallis were already parked at the emergency door. Their crews were waiting in the hallway with their patients for treatment rooms or personnel to become available.

We’ve all heard about the pressure hospitals are under because of Covid-19, and this may have been a small example.

In my case, the wait was one hour, but I was in no distress. It seemed as though with the care provided by the firefighters and medics on the AFD ambulances, the ride itself had a curative effect. (hh)

Postscript: And don’t worry, I’m home and the fingers can still type.


23 responses to “When the ride seems like a cure”