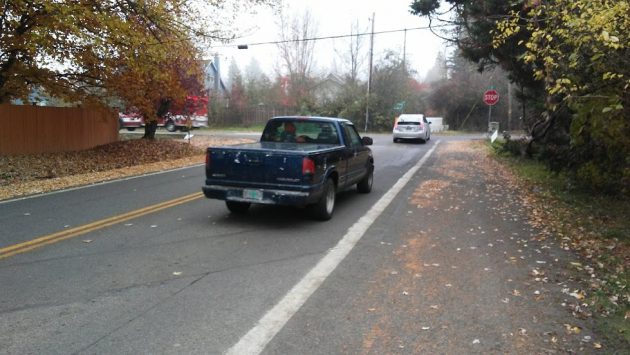 Looking south on Crocker Lane just as an ambulance zooms past on Gibson Hill Tuesday morning.

With the needed land secured, the way is now clear for construction of a long-awaited set of traffic signals at Crocker Lane and Gibson Hill Road in North Albany.

The Albany City Council accepted right-of-way dedications on the two corners of the T-intersection in September and October.

On Sept. 25, the council passed a resolution to pay $2,500 for a triangle of land on the northeast corner, measuring 20 feet on both Gibson Hill and Crocker.

On Oct. 23, council members agreed to pay $46,125 for a much larger slice of property on the opposite corner, northwest of the junction. That piece includes a triangle measuring 35 feet on both roads as well as a strip 10 feet wide the entire length of that property facing Crocker. (At a previous meeting, the council was scheduled to authorize taking the land by eminent domain, but that agenda item was withdrawn.)

The overall price for the northwest corner includes $18,000 for building a retaining wall made necessary by construction of the signal.

In 2016, the council considered four ways to control traffic at the junction. They ranged from stop signs on Gibson Hill, making the junction an all-way stop at a cost of $9,500, to a full-size roundabout or signals with turn lanes on Gibson Hill, each costing more than $1 million.

After first picking a roundabout, the council changed its mind the following year because it didn’t want to have to take the large amount of private property this would have required. Instead the council opted for signals, leaving the details to the staff.

City Engineer Staci Belcastro told me that as now designed, the plans provide dedicated left and right turn lanes for Crocker traffic going south to the junction. (There is, of course, no straight-ahead lane.) Construction is expected to take place next summer, in 2020.

The city’s Capital Improvement Plan originally called for the project to be built in 2019 and estimated its cost at $500,000. Belcastro says the most recent estimate shows the project still to be within its $500,000 budget.

So, if things go as planned, a year from now peak-hour drivers from all the new homes along streets feeding into Crocker Lane likely will have less of a wait getting on to Gibson Hill. As for the afternoon peak-hour wait on Highway 20 going downtown, for that no solution is in sight. (hh)


4 responses to “Way cleared for signals at Crocker, Gibson Hill”