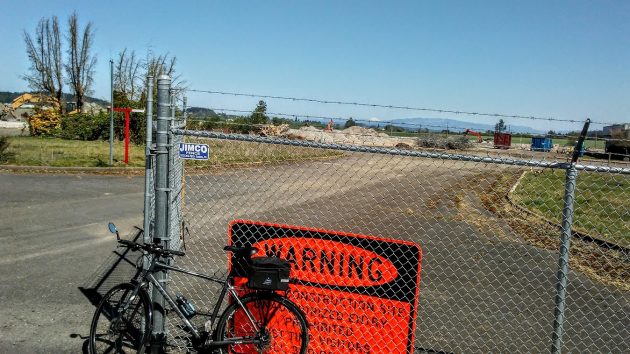 On Wednesday, at the gate to theformer mill site where the new intermodal center is being built.

It was in 2017 that I wrote my first story about what seemed, at the time, an unlikely idea: To turn the vacant site of the demolished Millersburg paper mill into a multimodal reloading center that would connect the mid-valley to the world.

“This sounds like a fantasy now,” the story that February said. Four years later, the idea is becoming real with construction on the ground and dirt being moved.

There hasn’t been much said about this project lately, so a reader who evidently had forgotten about it wondered about all the activity he had seen east of Old Salem Road. (That’s where International Paper shut down the paper mill in December 2009 with the loss of 270 jobs, and the mill later was razed.)

I took a bike ride up Old Salem Wednesday to see for myself. I didn’t venture into the site, but even from the gate you can see big machines working in the distance.

In a nutshell, the story is this. Then-state Rep. Andy Olson had the idea for a Willamette Valley truck-to-rail reloading facility. The goal was to ease truck traffic and congestion in the Portland area, and to help mid-valley shippers of mostly agricultural goods. Toward this venture Olson got the 2017 legislature to approve $25 million.

Led by Commissioner Roger Nyquist, Linn County got on board with support and pledges of money, and the Millersburg site won out over two or three competitors when the Oregon Transportation Commission made its choice for what would become a $23 million grant.

John Pascone, president of AMEDC, says 63 acres are being developed as the reloading center, with construction of several rail lines, loading docks, container cranes and so forth. The other half of the property, including a parcel on the west side of Old Salem, will be available for other development.

If you want to be overwhelmed with details, find the website of the Linn Economic Development Group here.

If everything goes according to plan, the reloading hub should be ready by the end of this year. Construction is expected to be be finished by December, and containers should be moving the following month. (hh)

The future reloading center in Millersburg has a nice view of the Cascades and Mt. Jefferson.