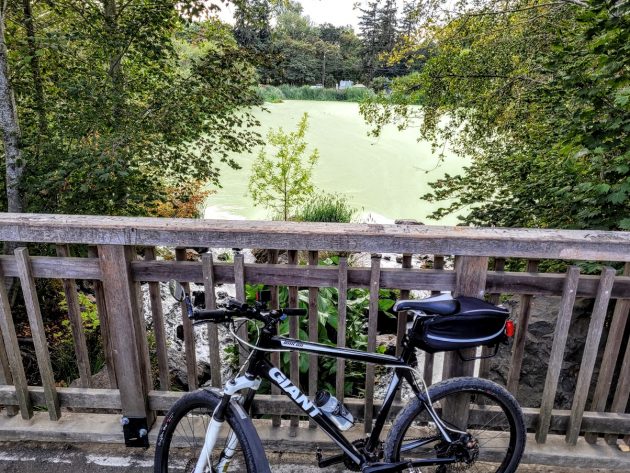 Visiting the Talking Water Gardens on the evening of Aug. 22.

In case you have forgotten, it was more than two years ago that the Oregon Department of Environmental Quality fined Albany $5,400 and gave the city 90 days to submit a plan to stop underground leaks from the Talking Water Gardens.

That action was nuts because the leakage can’t be stopped without enormous expense. But as far as I know it has not been resolved. The city remains under threat of further enforcement action from this state agency, which seems to have thrown reason to the wind. If this continues, the future of the Water Gardens is in doubt.

The Water Gardens were completed in 2012 at a cost of around $14 million in an attempt to cool treated wastewater from the Albany-Millersburg treatment plant before it goes into the Willamette River. (This itself was a questionable goal, but put that aside for the moment.)

Turns out that water from  the garden’s ponds seeps underground and some of it gets into First Lake and then the river. Why would anyone care, seeing that the water is already treated and clean enough for the river? Because, the DEQ claimed, the leakage amounted to an unauthorized discharge. If that’s so, the simple solution is to authorize it.

In 2019, when this debacle started, the city faced the possibility of having to spend millions of dollars to fix something that no reasonable person considers an actual, real-world problem. And so it sued the engineers who designed the Water Gardens, also for millions of dollars. That action remains pending.

Two years ago city officials and their lawyers were telling me they were negotiating with the DEQ to find a solution. No result of these negotiations has been announced, so we can assume the DEQ remains unmoved by common sense. Unless they relent, the only solution may be to shut the Water Gardens down.

If we had top leaders in the state government that paid attention to issues like these, this situation would never have come up. Officials in the DEQ would have realized that water usually does seep through the bottom of artificial ponds. Hard to see how this could have come as a surprise, since plans for the water gardens presumably had been approved by the DEQ itself.

Now it’s two years later. This is not the worst mistake the state government has made, but because it continues it’s one of the dumbest. (hh)


20 responses to “Two years on: Water Gardens still in danger”