This empty city lot awaits some use 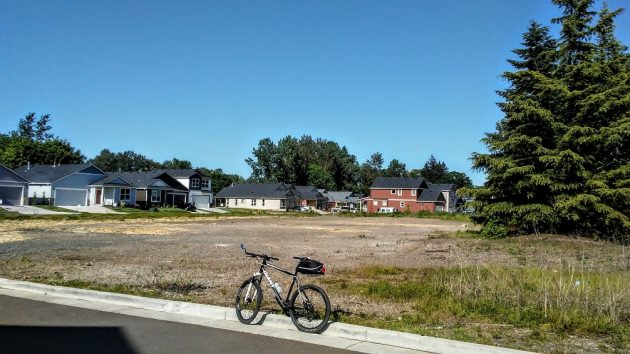 Now that Edgewater Village is finished, it’s once again time for the Albany City Council to consider what to do with a vacant lot in the middle of the development.

Albany obtained the vacant site of nearly one acre from the BNSF about eight years ago as the result of negotiations over the franchise allowing the railroad to continue to use Water Avenue for the former Oregon Electric freight track. But while the city paid nothing for the land, the acquisition was not without cost.

Then, in 2017, the city’s urban renewal program agreed to pay an estimated $250,000 for street improvements adjacent to the lot it now owned.

For years the site served as an unofficial parking lot for the Calapooia Brewing Co. across the street (Water Avenue.) But that’s no longer possible because of curbs installed as part of the new streets.

So what are the possibilities? The city could continue to do nothing and let the weeds return in the middle of this new housing development on the riverfront. It could try to develop the site for parking. It could try to sell it to anyone interested.

But instead, chances are the city will wait to see if the consultants for the overall riverfront redevelopment project come up with any ideas for this empty lot as well. (hh)


4 responses to “This empty city lot awaits some use”