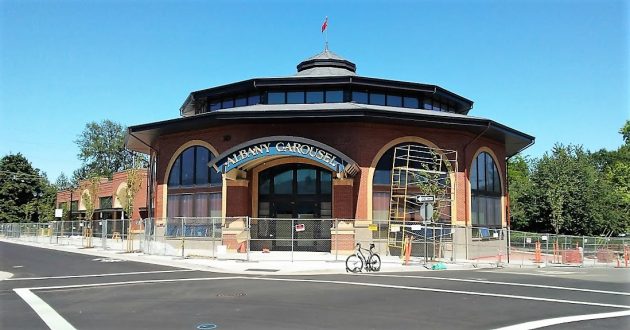 At City Hall they’ve been thinking about what to do if an acute parking shortage hits downtown once the Albany Carousel opens. And no, the alternatives so far don’t include asking visitors to come by bike, as much sense as that (in theory) would make.

Mayor Sharon Konopa brought up the subject at the city council meeting last week. She informed council members that she had asked the staff to look into the possibilities of using the city parks department’s “trolley” to shuttle people downtown from parking lots farther away.,

Bryant Park is one place where overflow parking might take place. Konopa also mentioned the privately owned lot outside the former Safeway store at Pacific Boulevard and Calapooia Street, where arrangements with the owners would have to be made.

Another possibility is to wait and see whether there’s a problem at all and then muddle through depending on what happens. About a thousand visitors are expected for the carousel opening on July 25 (which Konopa understood was still a tentative date). But on Thursday nights each July and August, several thousand people cram into Monteith Park for the River Rhythms concerts. Unless they live near the park, all those people found parking and then walked. Maybe the carousel crowds — if any — can do the same.

That’s for people from out of town. For Albany residents, taking their bikes might be the best solution after all. Bike riders can chain their rides to the nearest rack — or post if the racks are full — and thus avoid having to worry about car parking at all. (hh)