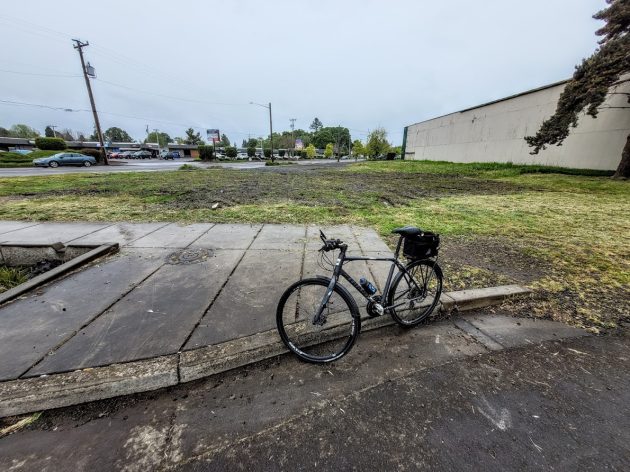 The former Cumberland Church lot, now vacant and for sale by the city, photographed on May 13.

The city of Albany is hoping to sell the former site of the historic Cumberland Presbyterian Church, a property that the Public Works Department acquired in 2000 for $150,000. But as of today, the vacant lot is still for sale.

With a notice in the paper and by contacting three potential buyers, city officials had invited offers by May 5. A neighboring property owner, President Yohn Baldwin of Baldwin General Contracting, submitted the only response, proposing that his company buy the lot for $10,000 and use it as parking for the shops he plans to develop on an adjacent property.

On Wednesday, the council planned a public hearing to consider the sale. But members were told that a second offer had come in, from Albany developer and real estate magnate Scott Lepman, for $45,000.

The council heard from Baldwin and, briefly, from Lepman, then decided to continue its public hearing on June 22. It also set a new deadline of June 15 of for any additional offers.

Baldwin told the council that because of its size and shape, and city development rules, the lot at 401 Main Street can’t be developed for anything other than a parking lot. That’s what he has in mind, while making a little “pocket park” at the point where Main Street and Santiam Road meet.

Lepman didn’t say why he wants the lot. Or if he did, I didn’t hear it.

Albany originally bought the site for street construction, but those plans changed. The historic church was moved last fall.

Because of the limits on possible uses of the property, Public Works Director Chris Bailey recommended the council accept Baldwin’s offer. But, acting on the advice of City Manager Peter Troeddson and City Attorney Sean Kidd, the council decided to wait and see what other offers might come in.

The city is not obligated to take the highest offer, or indeed to accept any offers. So we’ll just have to see how long it will take to get this former church property into private ownership and on the tax rolls. (hh)