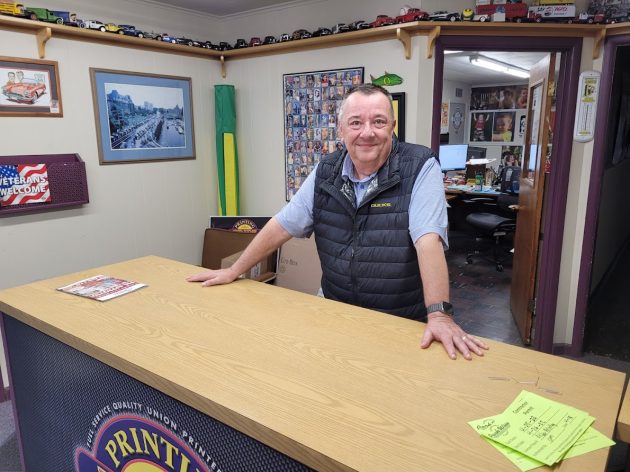 Scott Thorn says he hopes to have his business moved out of the St. Francis by July 1.

Another page is about to be turned in the continuing story of changes in Albany’s downtown. Pride Printing has occupied the ground floor of the former St. Francis Hotel for about 50 years, and now the business leaving.

I went by the corner of First and Ferry on Wednesday as movers continued taking big old machinery out of the building so the items can be trucked to whoever had bought them. Scott Thorn, whose father had moved the print shop into the building in the early 1970s, was in his office.

He told me he would like to stay downtown and has been looking for an office location. He has his eyes on a spot but has been unable so far to reach the owner.

Thorn intends to keep the business going, with the office in a different place, and continue farming out the actual printing to a company in Salem, as he has been doing for some time.

He hopes to be out of the St. Francis by July 1.

After that, according to present plans, the historic former hotel may begin what is likely to be a slow transformation.

Scott Lepman, the Albany developer and renovator of residential properties, bought the St. Francis on March 10 in a deal facilitated by the Central Albany Revitalization District or CARA.

Lepman’s intent is to renovate the old hotel and adjacent “Rhodes block” as apartments, but this endeavor still faces a number of unknowns, including “how to keep the weather out.” The brick on the south and west walls has deteriorated to the point where something has to be done.

Other Lepman projects are under way or pending. Interior demolition has started on the old post office and city hall on Second Avenue. Crews are still working to complete the Opera House Apartments on First Avenue. And work on the Wood Apartments on Third is finishing up and townhouses are planned next door.

As for the St. Francis, Lepman told me the other day his company was peparing an application to the Landmarks Commission. Let’s just hope it won’t lead to a controversy over the kind of replacement windows the city will allow. (hh) 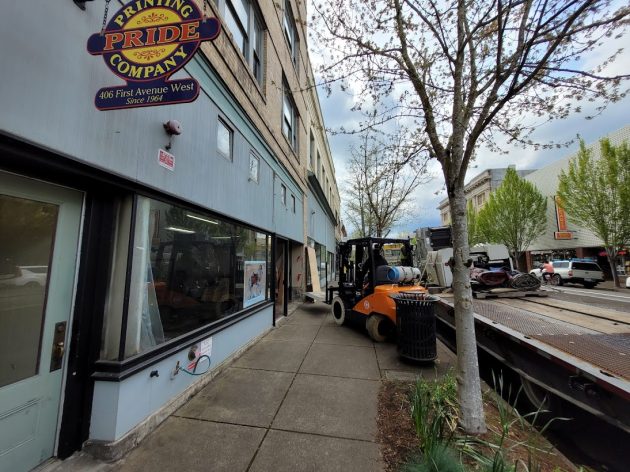 Machinery was taken out of Pride Printing Wednesday to be hauled away.