Seen up close, those sewer grates are safe 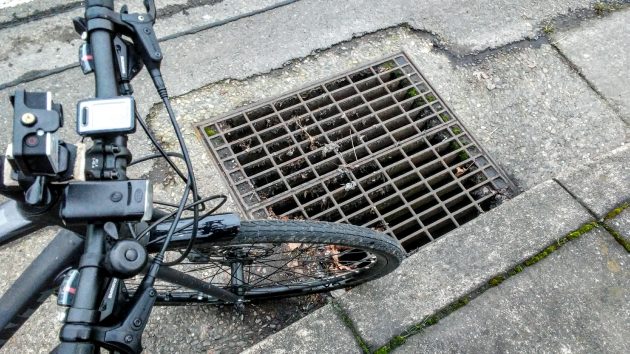 All the storm sewer grates I saw on Santiam and Pacific look like this.

Friday’s short video tour of bike lanes along Highways 20 and 99E (Albany’s Santiam Highway and Pacific Boulevard) caused a least a couple of viewers to worry about the sewer grates as they flashed by.

Weren’t the grates oriented the wrong way, with the bars running in the direction of travel? So that they would trap the tires of passing bikes and pitch the riders across the handle bars?

It looked that way, a little. But the moving pictures were deceiving. I took a closer look on Saturday afternoon when an errand at Bi-Mart put me on the Santiam Highway for the second day in a row.

As you see in the photo, taken from the sidewalk — while standing still, that is — the bars on this grate at Santiam and Clay Street run both ways. And while the lengthwise gaps are longer than those that run crosswise, they aren’t big enough to become a tire trap.

Too much on this little item? Probably, but I didn’t want to leave anyone with the wrong idea.  Whatever hazards we face on Albany highways, the sewer grates aren’t it. (hh)


5 responses to “Seen up close, those sewer grates are safe”