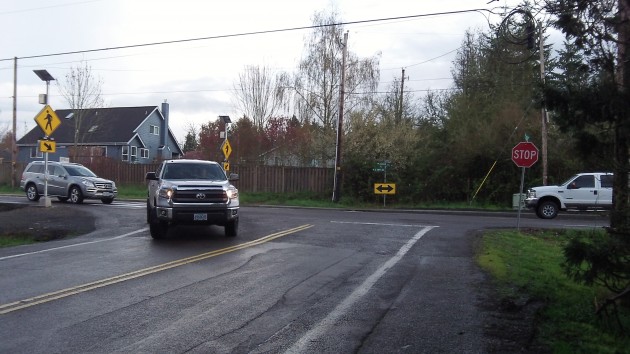 A driver turns right from Gibson Hill on Crocker Lane.

Another roundabout may be in North Albany’s future if an informal survey accurately reflects what people want and the city council follows their advice. But it’s far from unanimous, and in their written comments the survey respondents are giving the council all kinds of conflicting views.

The city council asked for public input before deciding what kind of traffic controls to install at Gibson Hill Road and Crocker Lane, a T-shaped intersection where delays are becoming more frequent as the number of North Albany houses, residents and commuters expands.

The council called for a public meeting, and since this story first was published here, the open house has been scheduled for Tuesday, April 26, 4-6:30 p.m., at City Hall.

On the city’s website (cityofalbany.net) there’s a page showing five possible intersection treatments and asking people to pick their preferences. As of Tuesday, 294 people had given their opinions, but not all were such that they could be counted. One, for example, showed four of the choices as fourth-best and the fifth as worst.

Among the responses tallied so far, 117 opted for a “modern” or full-size roundabout, which consulting engineers estimate would cost $1.4 million and require the acquisition of quite a bit of property on all three sides of the junction.

In second place with 56 votes was a set of traffic signals with turn lanes, costing almost $1.9 million. A small roundabout costing $282,000 was third with 49 votes. Traffic signals without turn lanes would cost $538,000 and got 39 votes. The least expensive option – at $9,500 practically free in comparison – was the choice of a mere 34 online survey clickers.

People also gave the city the benefit of their thinking, several of them thanking officials for the chance to be heard. But their advice was all over the board. There were 105 written suggestions or comments. A sampling, not necessarily representative:

• “I do not recommend a roundabout because most people do not know the proper way to use a roundabout.”
• “We think the best choice is the modern roundabout.”
• “The roundabout is a traffic nightmare… Anybody that thinks the ‘modern roundabout’ is an intelligent choice should be redirected to trash collection instead of traffic engineering.”
• “Anything but another stop light. The new ones (on North Albany Road – ed.) do not work correctly. They turn red on the most used road when there is no traffic.”
• “… a traffic light would be the best option … A stop sign intersection would create a bottleneck.”
• “All-way stop would be the least cost. Start with that. No roundabout.”
• And this all-purpose recommendation: “Thanks for asking. I think it is important to keep traffic moving as much as possible. Think hard.”

The council may have thought getting the public’s input would make the decision easier. So much for that. (hh)


15 responses to “Roundabout leads for Gibson-Crocker”