Riverside bike route: Not so fast 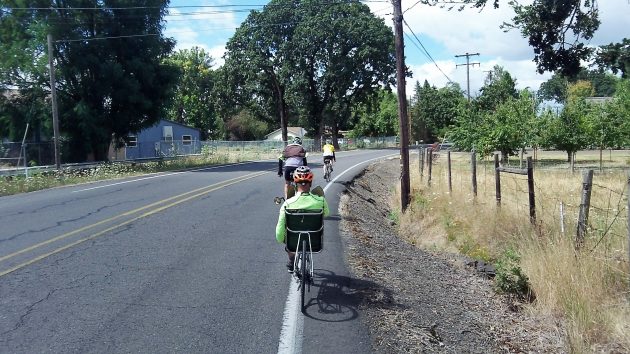 Cyclists cruise along Riverside Drive near the old Riverside School on Aug. 2.

ODOT completed a million-dollar separated bike path along Highway 34 last fall. It’s supposed to be part of a safer bike route between Albany and Corvallis. Linn County had hoped to start this year on its part of the deal — wider shoulders along part of six-mile-long Riverside Drive — but there’s been a delay.

ODOT’s completed segment along the north side of Highway 34 is great — away from traffic, nicely paved and even supplied with helpful wayfinding signs like this: 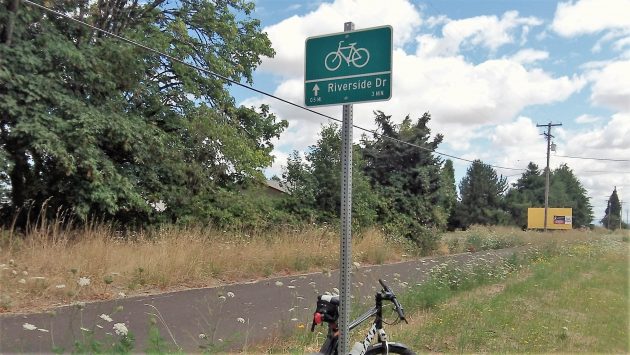 Half a mile or three minutes to Riverside.

But at Riverside Drive, bike path luxury comes to an end: 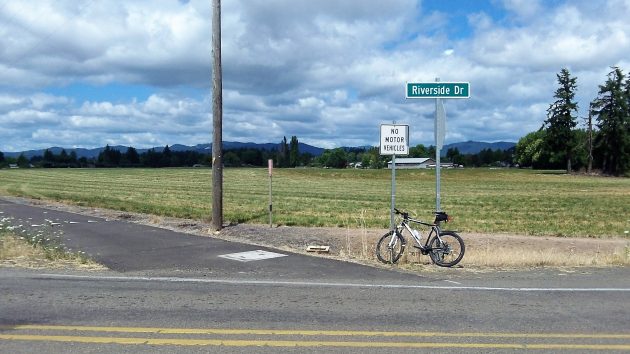 Riverside Drive itself isn’t bad. Much of the six-mile road from Highway 34 to Albany has pretty good shoulders. (Though on Tuesday, as I’m riding north, a kid in a car decides to pass a southbound truck. I considered going in the ditch, but he stayed in the lane and missed me by about a couple of feet.)

But there are parts of Riverside where the shoulder has crumbled into deep ditches. That’s where a little widening, as the county had planned, would increase everybody’s confidence that crashes will continue to be rare.

Over the years, County Commissioner Roger Nyquist and I have had conversations about this project. Last week I asked him how it was coming. Not so good, it turns out.

“At this point, nothing is scheduled to be paved this season, which is disappointing,” Nyquist told me in an email. “Staff continues to work right-of-way acquisition along with the usual flood plain and environmental issues, although it seems to be slow going. In addition, the federal grants we have received to do work on other projects (have) reduced our staff time available on our Riverside Drive project. Adding the bike lane on Quartzville road is an example. They do intend to put signage up this fall on Bryant and Riverside designating the route. I am  a bit embarrassed that ODOT has been able to deliver on the project and we at the county have not.”

Let’s not give up hope, though. Eventually the improvements may yet be made, as part of regular upgrades and maintenance. In the meantime, ODOT’s completed segment along 34 is reason enough to brave narrow shoulders and occasional oncoming teenagers in fast cars on the Riverside route. (hh) 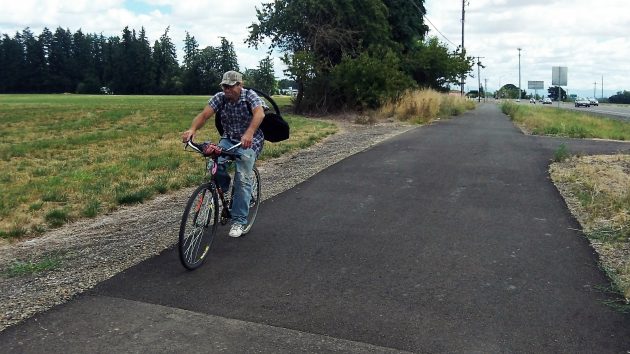 A traveler on the bike path alongside Highway 34.


One response to “Riverside bike route: Not so fast”