Riverfront designs: a chance to speak up 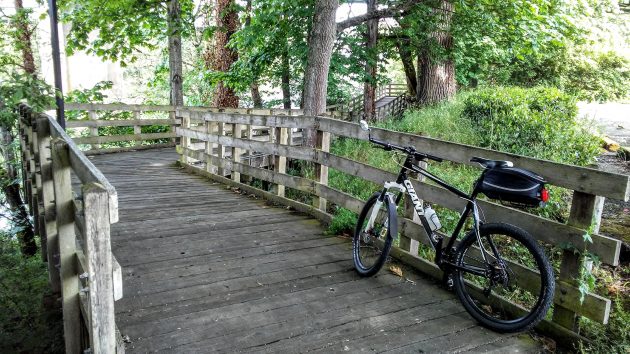 The boardwalk segment of the Dave Clark Riverfront Path on May 26. Consultants have suggested that it be refurbished.

Since it’s raining, this may be a good time to check out the various concepts Albany’s consultants have worked up for redoing the Willamette riverfront. And then to let them know what you think.

The team of Walker Macy, the Portland firm working on the project for the downtown urban renewal district CARA, is holding an online “open house” to gauge public reaction to potential changes in Monteith River Park, on the Dave Clark Riverfront Path, and along 14 blocks of Water Avenue from Washington Street to Main.

You can find the presentation here.

There are three proposals for adding features and moving things around at Monteith Riverpark. All three would reduce the number of parking spaces there now, and two would have the senior center moved somewhere else in town.

For the Clark Path, the consultants have two concepts, one with public art, and other based on river views. Both would have more access points from Water Avenue. They also call for better lighting, which is puzzling since CARA  spent $298,000 on new lights along the path in 2016 to promote safety and deter trouble.

Along Water Avenue, the concept is to create a kind of plaza at the west end and add sidewalks and trees on the stretch toward Main to slow traffic.

There are many details to all this, and they are explained and illustrated in the text and images of the “open house.”

CARA, meaning the advisory board but ultimately the city council acting as the Albany Revitalization Agency, has said it wants the riverfront project to be its crowning and concluding effort in the downtown revival campaign that started in 2001. Walker Macy, the consulting firm, has a CARA contract for up to $2.36 million to develop designs and buildable plans.

As for me, I wonder how practical or necessary some of the concept elements are, and who would pay for their maintenance if they were built. But take a look and make up your own mind.

Whether you approve, object or something in between, make use of the space for comments provided in the presentation’s online pages. That way the consultants, the CARA board, and ultimately the city council will know where you stand. (hh)


11 responses to “Riverfront designs: a chance to speak up”