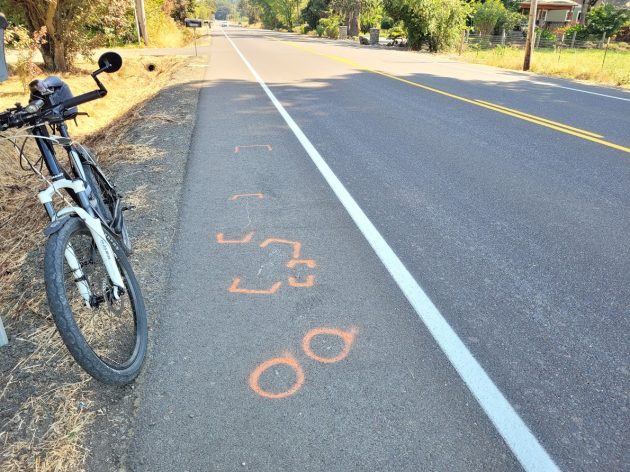 Looking east on Riverside Drive: Pavement markings on Aug. 30, a week after the crash happened.

The accident that killed an Albany bicyclist on Riverside Drive on Aug. 23 remains “under investigation,” according to a police traffic crash report the Linn County Sheriff’s Office released on Friday.

The report is a standard form to be filled out after any crash. There’s a page for a narrative describing what happened, but the narrative page released by the sheriff is blank.

Kelli Lyn Kennedy, 52, who lived with her family in the Broadway Neighborhood, died in the crash about a quarter past 8 that Tuesday morning. Wearing her helmet, she was riding her bike west on Riverside toward Bryant Drive about 500 feet away.

She was hit by a 2002 Chevrolet Avalanche, also going west. The crash report identifies the driver as Charish Colleen Yvonne Norberg, born in 1991. The report blanked out her address and date of birth, giving only the year, but the sheriff’s office has said the driver was from Albany.

The report is silent on what caused the crash. There’s a box that says “distracted” for the driver, without saying what distracted her.

According to the form, the driver said she was going 53 miles an hour, and the posted speed is 45 mph. The vehicle had damage on the right front, but the air bags did not deploy.

The report shows no impairment or cell phone use.

On this blog, I don’t normally report on traffic incidents, but bicycling is one of my main themes, and I have a personal interest in this sad event.

First, it happened on a route I and other cyclists often use.

Also, in Democrat-Herald editorials I had supported widening Riverside Drive to make it safer for cyclists, and when I left the paper in 2012, the Linn County Commissioners voted 2-1 to make it a scenic route named after me.

The accident happened on a segment not included in the scenic declaration, which covers Bryant Way and Drive, and then Riverside from Bryant to Highway 34.

But 2.4 miles of Riverside from Albany to Meadow Road, including the crash site, was widened with the bike route in mind when the county repaved it in 2018.

The county has said that eventually it hopes to widen the Riverside shoulders all the way to Highway 34, where a separate bikeway to Corvallis begins.

Wider shoulders surely help where bike safety is concerned, but unfortunately they are not a guarantee. (hh)